Baroness Orczy's The Old Man in the Corner 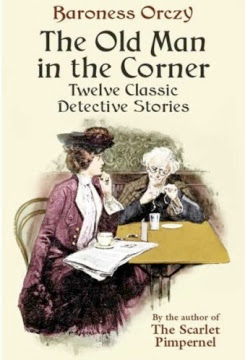 The Old Man in the Corner contains twelve of the stories by Baroness Orczy featuring the mysterious man who sits in the corner of the ABC tea shop fiddling with a piece of string whilst working our the solutions to crimes that have baffled the police. Each case is unfolded during the course of a conversation between the man in the corner and a lady journalist, an ingenious method that avoids the necessity of a clumsy tacked-on explanation of the crime.

Baroness Orczy (1865-1947) is of course far better known as the authoress of The Scarlet Pimpernel. She was born in Hungary but her family relocated to London after losing most of their fortune. She turned to writing out of necessity and was immediately successful. Her literary output was quite considerable and varied and included no less than 38 stories featuring The Old Man in the Corner, written between 1901 and 1925. She also created one of the first great women detectives, Lady Molly of Scotland Yard.

Apparently Baroness Orczy’s husband advised her to create a detective who was as unlike Sherlock Holmes as it was possible for a detective to be. She certainly succeeded. This rather shabby, very eccentric detective is like no other. And he has no interest in helping the police or the courts to bring criminals to justice and in fact never lifts a finger to do so – for him it is purely an intellectual challenge. Which of course means that both the reader and the lady journalist in the tea shop have to accept on faith the old man’s solution to these criminal puzzles.

I think The Liverpool Mystery is my favourite but all twelve stories in this collection are excellent.

These highly original and entertaining stories are essential reading for any crime fiction fan.
Posted by dfordoom at 1:25 AM