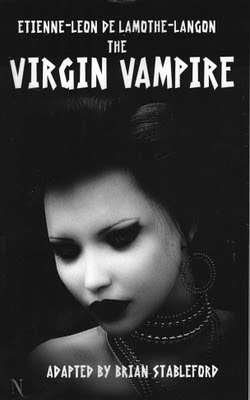 The Virgin Vampire (La Vampire, ou la vierge de Hongrie) was one of several gothic novels written by Etienne-Leon de Lamothe-Langon, an author who went on to have enormous success with lurid faked memoirs of famous people.

The Virgin Vampire appeared in 1825. John Polidori’s The Vampyre had enjoyed a major success in 1819 and had triggered off the first vampire fiction boom.

What makes The Virgin Vampire slightly different from most vampire tales, both before and since, is that it depicts vampires as having a purpose. A religious purpose. Their function is to punish those who break a sacred vow. In this case the vow was made by a handsome young French officer named Delmont to an innocent young Hungarian woman. The officer returned to France, married and had two children, and thought no more about his brief liaison in Hungary with a girl named Alinska.

And then Alinska reappears in his life. She has not forgiven him, she has not forgotten, she still considers the promises he made to her to be binding. The officer, now Colonel Delmont, is worried by Alinska’s presence but assumes that she is merely obsessed. The thought that she might present any real danger does not occur to him. He certainly does not imagine that there could be any supernatural threat to his family or to to himself. He is a man of the Enlightenment and has no belief in such superstitions. It’s not that he dismisses the idea of such a threat - it’s something so remote from his intellectual makeup that it never even enters his head.

Delmont still refuses to consider the possibility that something uncanny, something unnatural, might be taking place. Reports of odd deaths, apparently caused by massive blood loss, do not concern him.

Alinska has taken a house near the Delmont estate. When Alinska’s house mysteriously burns to the ground Madame Delmont (who knows nothing of her husband’s previous involvement with this woman) insists that the now homeless girl should move into the Delmont household.

Colonel Delmont is not the only one who is unable to perceive the existence of a real and immediate supernatural threat. While rumours of a vampire are abroad in the neighbouring countryside these rumours are ignored by the more educated people. Unfortunately this includes the Delmont’s doctor, called in when an inexplicable illness strikes down a member of the colonel’s family.

Only the victims of the vampire are aware of what is happening and even they seem uncertain as to whether they are merely dreaming of nocturnal assaults by vampires.

This is an unconventional type of vampire, in some ways closer to the kinds of psychic vampires that would become popular in vampire fiction in the late 20th century. It’s not clear whether this vampire actually physically drains its victim’s blood but nonetheless this is a very real vampire and the scepticism of Colonel Delmont and his acquaintances will not protect them.

There’s also an intriguing moral ambiguity to de Lamothe-Langon’s concept of the vampire. Is this vampire a servant of Satan or of God? Is the vampire even aware of its own nature or of its own place in the universe?

All this probably makes the book sound rather more esoteric and serious-minded than it is. It is essentially a rather sensational and pulpy gothic tale (and it’s reasonably successful on this level) but with an admixture of curious and original ideas. While it’s perhaps not entirely successful it’s one of the more interesting examples of 19th century vampire fiction and is well worth seeking out. It’s available from Black Coat Press, translated by Brian Stableford and with the usual excellent and stimulating introduction and afterword that he customarily provides with his translations. Recommended.
Posted by dfordoom at 2:50 AM