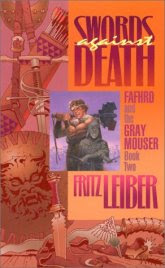 Fritz Leiber’s Swords Against Death appeared in paperback in 1970 but most of the stories included in this collection the stories had originally been published in various pulp magazines over the course of the preceding three decades.

Fafhrd and the Gray Mouser are among the most memorable of all sword and sorcery heroes and Leiber was one of the masters of the genre.

There are a couple of stories in this collection that are a little weak, but overall it’s superb. I loved The Bleak Shore with its wonderful atmosphere of inescapable doom, of death calling to human victims who have no choice but to heed the call. The Howling Tower is even better. A very creepy atmosphere, and the idea behind it, of a man haunted by the ghosts of dogs who must find victims to assuage their hunger for souls or be driven mad by their other-worldly howling, is brilliant.

The Thieves’ House is a great fun romp. The Sunken Land is nicely creepy and has a feel of inescapable doom a bit similar to The Bleak Shore. And Bazaar of the Bizarre is a wonderfully enjoyable and strange story.

Leiber’s sword and sorcery tales could on occasions be light-hearted but they could also be very very dark indeed. I had forgotten just how good a writer he was!
Posted by dfordoom at 4:48 PM