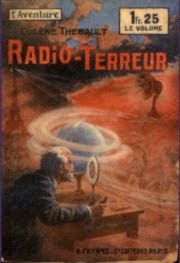 This is a mad scientist story on the grand scale. I begins with Paris being terrorised by strange radio messages, messages that drive every other broadcast off the airwaves. The unknown voice threatens nothing less than the destruction of civilisation. The populace is at first inclined to treat the threats as a joke, until the voice presents with them incontrovertible evidence of his ability to translate his threats into reality.

Fortunately civilisation is by no means defenceless. The great Professor Mazelier and his talented and devoted assistant Monsieur Gribal are determined to foil the plans of the evil genius. But just who is this monster of evil? It doesn’t take long to establish the undoubted fact that the man behind these sinister menaces is the Marquis de Saint-Imier, and that the marquis is both insane and brilliant.

It is clear that the marquis is a master of the scientific arts, a man who can harness the power of radiation and project his powers over great distances. He can not only cause destruction at any point he chooses, he can also observe his enemies’ activities no matter where they might be.

Professor Mazelier is also no stranger to the powers of radiation and has technologies at his command that are the equal of anything possessed by the marquis, but he and the marquis are involved in a kind of arms race, both parties seeking to constantly improve their technologies in a deadly game of catch-up.

The marquis soon gives deadly proof of both his abilities and his willingness to use these abilities. The fate of western civilisation hangs in the balance.

This novel was translated by Fletcher Pratt, at the time a well-known author of fantasy literature, and was published in English by Wonder Stories in 1933.

It’ a fine example of the richness and diversity of early 20th century French science fiction. It’s all very breathless and exciting and it’s not meant to be taken too seriously. This is not exactly hard science fiction. As a mad scientist tale it’s great silly pulpy fun.

Unlike most of Black Coat Press’s publications this one includes only the briefest of introductions but this is is still a very enjoyable tale.
Posted by dfordoom at 12:23 AM