The Invisible Bullet & Other Strange Cases of Magnum, Scientific Consultant 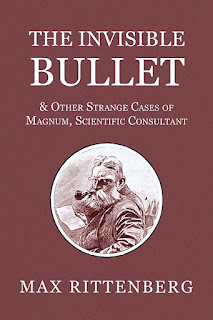 Max Rittenberg (1880-1965) was an interesting figure in the development of the detective story. Born in Australia of German and Russian Jewish ancestry he moved to Britain and had a short but prolific carer as a writer of detective stories. After giving up fiction writing he concentrated on his very successful career in advertising and public relations.

His other series detective was Magnum, an early exemplar of the scientific detective. Magnum is a bad-tempered conceited and arrogant middle-aged scientist who dabbles in crime solving if a case interests him or (more often) if he’s offered enough money to make it worth his while. He has a shy young Welsh assistant named Meredith who does all the detail work (for which Magnum has no patience) while Magnum concentrates on the big ideas.

The stories date from the period just before the First World War and many of the solutions involve technological wizardry rather than pure science. Coachwhip have published all the Magnum stories in The Invisible Bullet & Other Strange Cases of Magnum, Scientific Consultant.

If you’re expecting really elaborate scientific puzzles you might be disappointed.The scientific elements are often fairly straightforward although the plots themselves do have some very clever ideas. In many cases the scientific elements simply add a touch of the exotic to otherwise unremarkable if competent crime tales. At times it seems that Rittenberg is actually more interested in the psychology of the people involved in his stories, and in the social implications, than in the actual science. Given that Rittenberg’s field was public relations rather than science this is perhaps not surprising.

The Mystery of the Sevenoaks Tunnel isn’t all that scientific but it has a nicely ingenious solution. A man has been killed falling from a railway carriage. It appears to be an accident but his life was heavily insured and the insurance company believes it was a case of suicide, which means they don’t have to pay up on the policy. Magnum believes the key to the puzzle is that the man was carrying a bottle of medicine and it’s medicine that has only one purpose - to treat sleeping sickness. An entertaining enough tale.

The Queer Case of the Cyanogen Poisoning is much better. A wealthy family is being slowly poisoned. That much is obvious. Unfortunately even though every item of food and drink with which they come into contact has been analysed no trace of poison can be fond. Even the air in their house has been analysed, with similarly negative results. And yet the stubborn fact remains that they are being poisoned. The solution in this tale is pretty clever.

The Bond Street Poisoning Bureau is a different kind of poisoning tale. A sinister character known as Kahmos is operating a kind of one-man Murder, Inc in London, making a very lucrative living poisoning inconvenient relatives for clients who need their inheritances sooner rather than later. Magnum makes use of some very high-tech gear (by 1913 standards) to crack this case but actually laying hands of Kahmos proves to be more tricky. There’s nothing overly clever here but there’s some decent sinister atmosphere and a rather enjoyable pulp fiction vibe as well (assuming you like that sort of thing).

The theft of gold bullion en route to the Bank of England would be a very serious matter,
but in The Mystery of the Vanishing Gold something worse is happening - the gold ingots are just shrinking! And the Bank of England is being threatened - either pay fifty thousands for the secret of the vanishing gold or it will continue to happen. It’s a promising setup for a story that doesn’t quite deliver the goods.

The Secret of the Radium Maker tells of a struggling young inventor who has discovered a way of extracting radium from pitchblende at a cost far below that of existing processes. This discovery is worth a fortune, assuming that the process actually works. Magnum is called in to verify the discovery. An OK story at best.

The Invisible Bullet is a true impossible crime story. A man is shot to death in a fourth-floor gymnasium. It can’t be suicide - he was shot twice through the back. The murder weapon cannot be found. The murderer could not possibly have escaped from the gymnasium. The solution is a matter of logical reasoning from the evidence with science playing no real role  but it’s still a very fine story and it’s a genuine impossible crime mystery that compares favourably to similar stories by much more celebrated golden age practitioners of the craft.

Stories of phoney spiritualists are a dime a dozen but The Rough Fist of Reason has some genuinely original features, and a definite sting in the tail. Magnum investigates a medium who produces some extraordinarily convincing spirit photographs, and the puzzling aspect is that Magnum is able to establish that there has been absolutely no photographic trickery. Magnum of course is still convinced the photos are phoney but proving it will be a real challenge. The one slight weakness of this story (and also of The Invisible Bullet) is that luck perhaps plays too big a part in the uncovering of the vital clue but The Rough Fist of Reason is still an extremely good story.

Science can revolutionise many areas of human endeavour, including fraud, as we discover in The Three Ends of the Thread. It all starts with a document outlining a secret new process for tanning leather, a document that disappears under impossible circumstances. A well-executed little tale with some lovely twists.

The Empty Flask is another ingenious case of a poisoning that leaves no physical evidence whatsoever and it’s another rather neat story.

The Secret Analysis is a routine spy tale of limited interest.

The Mystery of Box 218 concerns an apparent robbery. The director of the Holborn Safe Deposit are convinced that their security is foolproof and yet a pearl necklace worth fifteen thousand pounds has been reported stolen from a safety deposit box there. The directors want the mystery solved but mostly they want to avoid any publicity so they turn to Magnum rather than the police. Magnum does employ some scientific apparatus in this case but mostly he relies on good old-fashioned detecting, taking note of a strange discrepancy in the evidence of an apparently reliable witness. This is a fairly well constructed and entertaining story.

The Message of the Tide starts with a neat enough idea - a message in a bottle floating in the Thames, a message telling of a man being held captive. Magnum’s scientific approach allows him to discover roughly where the bottle was dropped into the river. Unfortunately the rest of the story is not terribly interesting and it’s rather undeveloped, a weakness that afflicts a number of the Magnum stories.

The Secret of the Tower House concerns the mysterious death of a couple of dogs. It’s the symptoms displayed by the dogs before their demise that causes the worry. Of even greater concern is the source of the infection and the explanation is certainly creepy and a bit grisly. An OK story.

Dead Leaves is a moderately interesting story involving a missing will.

The Three Henry Clarks is not a bad little tale. A man named Henry Clark sets off for Scotland Yard to request help but dies very suddenly in the street outside. Magnum finds that he has been poisoned. A terrible crime but nothing unusual, except that it follows hard on the heels of the sudden mysterious death of another Henry Clark. And while Magnum and Detective-Inspector Callaghan are pondering this mystery news comes of the sudden demise of a third Henry Clark. It’s a fine setup for a story although it turns out to be not quite as ingenious as one might have hoped.

Cleansing Fire is interesting not so much for its plot as for the very surprising identity of the culprit. Magnum is investigating a suspected case of arson on behalf of an insurance company. The insurance company is convinced that it is arson and that it was a deliberate act on the part of the factory owner. Magnum is by no means entirely convinced on either point.

The solution to the puzzle is the result of some fairly determined sleuthing by Magnum, even including a spot of breaking and entering. It’s the motivation of the act that is the big surprise here.

Red Herrings tells of an ingenious scheme to kidnap the Home Secretary. As is the case with quite a few of the stories it’s the setup for the crime that is most impressive.

One thing you have to bear in mind is that Rittenberg was writing these stories before the First World War. This is pre-golden age stuff and while the plots are often ingenious they don’t have the extreme complexity of full-blown golden age mysteries. They’re still mostly very enjoyable and sometimes quite clever and Magnum is a fun larger-than-life hero with some amusing quirks. Recommended.
Posted by dfordoom at 5:44 AM