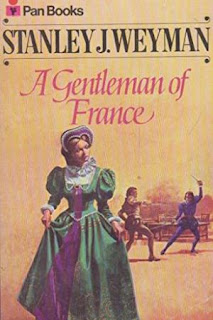 Stanley J. Weyman (1855-1928) was an immensely popular author of historical romances. He was best known for his tales of swashbuckling adventure written in the early part of his career prior to 1904. Weyman enjoyed the esteem of both critics and the reading public and his admirers included Graham Greene.

Weyman was particularly attracted by sixteenth and seventeenth century French history. A Gentleman of France opens in 1588. This was the period of the Wars of Religion in France, between the Catholics and the Huguenots. It was also the time of the succession crisis, with the Protestant King Henri IV of Navarre being the heir to the throne and with conspiracies afoot to prevent him from succeeding to the throne of France in the event of the death of the current king Henri III. In fact there were countless potential conspiracies complicated even further by foreign meddling.

Gaston, Sieur de Marsac, faces a grim future. He is a Huguenot, he is forty years old and he is penniless. He has the pride of a gentleman but he lacks the financial resources that such a station in life requires. The death of his patron, the Prince de Condé, has left him in desperate straights.

He is therefore overjoyed to receive a summons from the King of Navarre. He is entrusted with a mission, to convey a young woman who is presently being held against her will to a place of safety. Henri of Navarre cannot possibly be seen to be openly involved in this rescue mission which is why the poverty-stricken luckless de Marsac is such an ideal choice to carry it out. He is expendable, and if things go wrong Henri can plausibly claim to have known nothing whatever about the scheme.

The young woman is Mademoiselle de la Vire, a maid of honour at the court of Henri of Henri of Navarre. She proves to be quite a handful of de Marsac. In fact she proves to be a complete nightmare, being wilful, spoilt, impetuous, unpredictable, vindictive and entirely uncooperative. The band of ruffians de Marsac has hired to help carry out his task are another problem. They prove to be even more treacherous than he’d anticipated. In addition it seems that various political crises are all coming to a head and de Marsac is going to be caught in the middle.

This is a moderately long novel but there are so many plot twists and de Marsac’s path is strewn with so many obstacles and pitfalls and false turnings and there are so many betrayals and counter-betrayals that there’s never any danger of boredom. There’s plenty of action and the sense of danger never lets up for a moment.

While de Marsac is not totally lacking in allies they’re not necessarily allies on whom one wold want to rely absolutely. They have their own agendas. This is even more true of the powerful men who are willing to make use of de Marsac - it’s not that they bear him the slightest ill-will but they are playing for very high stakes and he is a very insignificant very poor very minor petty nobleman and his wellbeing is not exactly their highest priority.

There is, as you might expect in a 19th century English novel, a certain anti-Catholic bias. The Catholic characters are not all wicked but the villains do tend to be Catholics. The Protestant characters do tend to be virtuous and noble. This was such a pervasive feature of English popular culture at the time that Weyman may not even have been conscious of his bias.

Gaston de Marsac is a fine and reasonably complex hero. He is brave and determined but he makes a lot of mistakes and his judgment is erratic. It’s not that he is unintelligent. Far from it. He simply has a tendency, at times, to be a little careless and perhaps inclined to underestimate the difficulties that he faces.

This is very much a swashbuckling adventure. There is a love story here but it takes a definite back seat to the action adventure story.

This is thoroughly enjoyable stuff in the slightly literary tradition of Victorian writers of adventure such as Anthony Hope and Rider Haggard. Highly recommended.

This is thoroughly enjoyable stuff in the slightly literary tradition of Victorian writers of adventure such as Anthony Hope and Rider Haggard. Highly recommended. Pan Books issued this one along with several other Weyman titles in paperback in the early 70s so used copies can be found at very reasonable prices.

Weyman’s 1894 adventure Under the Red Robe is also very much worth reading.
Posted by dfordoom at 12:26 AM