Leigh Brackett’s The Secret of Sinharat 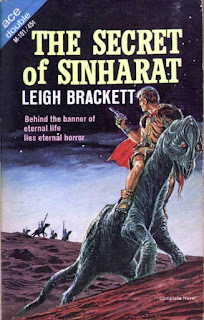 Leigh Brackett’s 1964 novel The Secret of Sinharat is an expanded version of her 1949 novella Queen of the Martian Catacombs.

There is a rebellion brewing on Mars. The ruthless and clever Kynon has persuaded a number of warring tribes to set aside their differences to follow him. The army he is collecting is drawn from the Drylands (the Martian deserts) and from the low-canal country. Kynon has employed mercenaries to train his armies, dangerous men like Luhar the Venusian and Eric John Stark. To weld his army together he holds out a fabulous promise - eternal life (of a sort anyway).

Eric John Stark is Brackett’s best-known character, appearing in quite a number of stories from the 1940s right through to the 1970s. He is an Earthman but was raised by barbarians on Mercury. He is a Tarzan-like figure, belonging wholly neither to the world of civilisation nor to the world of the barbarian but able to move freely and confidently in both worlds.

In this story Stark is in fact a spy. Unknown to the rebels he is working for the Earth Police Control, his job being to find out just how dangerous the rebellion is likely to be and how it can be thwarted. Stark has a twenty-year prison sentence hanging over his head, which is why he was so willing to turn spy (Earth Police Control will wipe the slate clean in exchange for his help).

It is a dangerous task that Stark has taken on, much more dangerous than he’d expected. Among Kynon’s followers is at least one man with a longstanding grudge against Stark, a man who will be satisfied only by Stark’s death. And within days Stark finds that he has made other deadly enemies. Delgaun, the leader of the contingent from the low-canal city of Valkis, clearly wants Stark dead although Stark has no idea why this should be. Stark can handle himself well enough and would be quite capable of disposing of these enemies but that is exactly what he cannot do - to do so would jeopardise his mission.

Adding to his worries is the woman Berild. Is she Kynon’s woman or Delgaun’s? Does she have plans to be Stark’s woman? She is intelligent, ambitious and entirely lacking in scruples but there’s more to her than that. Stark has seen her in the moonlight, tracing the walls of a long-dead palace, walls that no longer exist even in ruins. Those walls crumbled into dust aeons ago but Berild knew every inch of that palace. It’s a particularly effective scene showing Brackett at her most effectively moody and disturbing.

The climax of the drama will come in the city of Sinharat. Sinharat is the sort of city that Brackett loved to create. It is a dead city, the capital of a dead civilisation, but is the past ever really dead? On Leigh Brackett’s Mars you can never be sure. Sometimes the past is more real than the present. Sinharat is not just a dead city. It is a city of evil. It is a vague formless nameless evil, and it is a very ancient evil. In Brackett’s universe ancient evils are the most deadly of all.

This is a story fuelled more by atmosphere and a sense of foreboding than by action. Brackett could and did write fine action stories but her sword-and-planet tales are more often exercises in style and mood. And some of the very best of her stories are entirely lacking in action.

There is however plenty of menace in this tale. The threat of violence is ever-present, although there are things that are more to be feared than mere violence.

Berild is a typical Brackett anti-heroine. She is beautiful, fascinating and clever but trusting her is likely to prove to be unwise, to say the least. Fianna, the servant of Berild, seems like she’s going to be a typical Brackett feisty good girl but she turns out to be much more complex than that.

The ending is especially good, being not quite what we expect and yet it feels right.

The original novella, Queen of the Martian Catacombs, is included in Gollancz’s Fantasy Masterworks volume Sea-Kings of Mars and Otherworldly Stories (a volume well worth buying).

The Secret of Sinharat is a fine display of Leigh Brackett’s mastery of the sword-and-planet genre. Highly recommended.
Posted by dfordoom at 12:17 AM