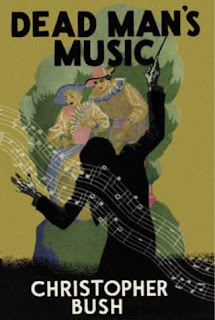 Dead Man’s Music is one of the earlier Ludovic Travers mysteries penned by Christopher Bush. It was published in 1931.

The story begins with the discovery of a body. The man may have hanged himself but Superintendent Wharton suspects foul play. The most suspicious circumstance is that elaborate attempts have been made to change the man’s appearance after death.

As it happens Durangos Limited had received an odd request a few weeks earlier and Ludovic Travers had been despatched to deal with the matter. The request was for a man of unquestioned integrity with a knowledge of music and china. As a result of this earlier involvement Travers is quite certain he recognises the corpse.

That earlier episode had been quite curious. A rather eccentric old man named Claude Rook had played a haunting piece of music for him and had then entrusted Travers with the manuscript with instructions to give it to the person to whom it ought to be given. He assures Travers that he (Travers) will know the identity of this person.

In fact it’s hard to be sure of the identities of any of the people involved in the case. Or even of their nationalities. Also curious is the fact that the manuscript is worthless - the music is unplayable. And yet the one thing Travers is sure of is that the manuscript is very very important. Yet another curious thing - Rook had wanted a man knowledgeable on the subject of china although his collection of china was nothing more than cheap junk.

This is not quite a straightforward whodunit. There’s a bit of a thriller feel to this one. There’s certainly a puzzle here and it’s crucial and it’s a tricky one but it’s not really centred on the identity of the murderer.

I’m not entirely sure this one is absolutely fair play. Although it might be more just to say that Bush plays fair with his clues as long as you understand that the real puzzle isn’t necessarily the obvious puzzle.

All three of Bush’s series detectives appear in this book - economist and private detective Ludovic Travers, John Franklin of the Detective Section of Durangos Limited and Superintendent George Wharton (known affectionately as The General) of Scotland Yard.

There are some very clever ideas in this story and there’s some good misdirection. On the whole though I don’t think it’s one of Bush’s more successful mysteries. The plot contains so many outlandish improbabilities that it’s in serious danger of collapsing under its own weight, and most of the cleverness is connected with what are essentially peripheral matters. These elements mostly serve to disguise the fact that the main plot is not all that interesting.

There are no ingenious unbreakable alibis to be broken in this story (even though Bush was known for his fondness for such things). This novel is in some ways a throwback to the pre-golden age period of detective fiction in which disguises and secret codes played such prominent roles.

Dead Man’s Music is reasonably entertaining but it’s not in the same league as Bush’s best work (such as The Case of the Tudor Queen, Dead Man Twice or The Body in the Bonfire). Bush’s novels are now back in print and easily obtainable. I’d suggest that Dead Man’s Music is definitely not a good starting point.
Posted by dfordoom at 5:08 AM