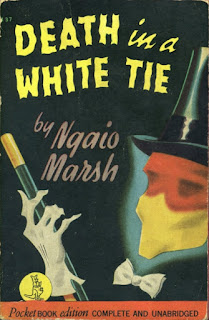 Ngaio Marsh is celebrated as one of the famous crime queens and I’ve always been rather sceptical of the crime queens. Christie certainly deserves her reputation but to my way of thinking Dorothy L. Sayers and Margery Allingham are wildly overrated. I must admit I don’t have enough familiarity with Ngaio Marsh’s work to have any strong opinion. I thought Death in Ecstasy was OK and so perhaps the generally well regarded 1938 novel Death in a White Tie will turn me into a fan?

Death in a White Tie is very much a society murder mystery. Detective Chief Inspector Roderick Alleyn’s mother has decided that it is time for Roderick’s niece to be launched into society. Lady Alleyn has the whole debutante thing planned out. Sir Herbert and Lady Carrados are similarly occupied with the coming out of Lady Carrados’s daughter Bridget. Meanwhile General and Mrs Halcut-Hackett are launching yet another fortunate young lady into society. The Carrados’s are planning a ball which will be the social event of the season and that ball will have (literally) fatal consequences.

Chief Inspector Alleyn is at the same time busy on a blackmail case. He employs Lord Robert Gospell as an unofficial undercover operative. He has apparently made use of Lord Robert’s society connections on other cases. That ball will play a significant part in Alleyn’s blackmail case - it’s where he’s hoping the blackmailer will be trapped. It does not work out the way Alleyn had hoped. It ends in disaster. In fact it ends in murder.

The first thing to note is that this is a rather long detective novel. The pacing is leisurely, to say the least. That’s not necessarily a problem. Seeing a complex plot gradually take shape and build towards a successful conclusion can be very satisfying. In this instance the plot is certainly complex, but I’m not so sure about the successful conclusion. To my way of thinking a good murder mystery is one in which the solution, once the detective has explained it, seems self-evident. The reader is left thinking that of course it had to have happened that way. No other solution would fit all the known facts. In this book, when the murderer’s identity is revealed, I was left thinking that yes that person could have been the killer but so could half a dozen other people.

I also think that in a good mystery we can see the detective slowly putting the pieces of the jigsaw together. In this book I never really got that feeling.

The detective in all of Marsh’s novels is Detective Chief Inspector Roderick Alleyn. Like so many detectives of this era Alleyn is upper-class, well educated and extremely erudite. But unlike most such fictional detectives Alleyn has no real personality. We know that he’s very upper-class and very clever and he’s an awfully decent fellow and everyone admires him. Perhaps that’s the problem. He has no quirks. He’s perfect but he’s terribly dull about it. And we get no insights into what makes him tick. Detectives don’t need to be larger-than-life to be interesting. Freeman Wills Crofts’ Inspector French is a very ordinary fellow who relies entirely on routine police procedures to solve his cases but French is a living breathing human being. Alleyn is simply a void.

The other characters are mere stereotypes but that’s no problem. The whole point of golden age detective fiction is the plotting, not the characterisation. Trying to make the subsidiary characters three-dimensional merely slows down the action for no worthwhile purpose.

Unfortunately Marsh cannot resist the temptation to introduce a romantic sub-plot. This is always a very bad idea. Even when the detective is an interesting character I have no desire to hear all about their romantic yearnings and when the detective is a bit of a bore (as Alleyn is) I’m even less interested. To make matters worse the target of his affections is  a lady artist who also has no discernible personality. The whole romance thing is poorly and unconvincingly handled (Marsh clearly knows nothing at all about men) and becomes tedious and embarrassing.

Marsh seems to have been one of those detective story writers with literary aspirations (she was entirely besotted with the arty/literary/theatre world). Like Dorothy L. Sayers she seems to have liked the idea of combining detective fiction with the comedy of manners. Unfortunately Marsh’s writing is rather pedestrian and so the first part of the book, before the murder, lacks any real sparkle. Once Alleyn’s investigation gets into full swing one might have hoped that things would get a bit more interesting but alas it doesn’t happen.

I wouldn’t say that Death in a White Tie is a terrible book. It’s just thoroughly mediocre. There’s no really strong reason that I can think of to read this novel.
Posted by dfordoom at 4:53 AM