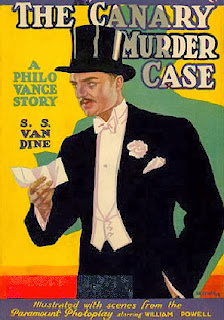 The Canary Murder Case was the second of S. S. Van Dine’s Philo Vance mysteries. It appeared in 1927 and was a huge bestseller, putting its author at the top of the tree as far as American crime writers were concerned.

The Canary is Broadway musical comedy star Margaret Odell. As successful as she was on the stage she was even more successful as a blackmailer. I say was, because the book opens with Odell’s murder.

A celebrity murder is bad enough but this case brings with it even more headaches for District Attorney Markham. It all hinges on the unusual layout of Odell’s apartment building.  The murderer could only have entered by the front entrance, and in doing so would certainly have been seen by the telephone operator on duty in an alcove off the main hallway. There are several suspects who might well have had, and in fact almost did have, very strong motives for murdering the Canary. But the layout of the building and the evidence of the telephone operator both conspire to make it absolutely impossible for any of the suspects to have been in Odell’s apartment at the time of her murder.

The impossibility of the crime is dismaying to the DA but it does not bother his friend, the celebrated amateur detective Philo Vance. As he explains to Markham, lawyers rely far too much on facts.

While the initial emphasis of the plot is on the seemingly impossible nature of the crime the alibis of the suspects will become increasingly important. Philo Vance however is more interested in the psychology of the killer. The nature of the crime and the way in which it was carried out are enough to tell him precisely the sort of person who must have committed it, and they tell him the sorts of people who could not possibly have done so. Vance does not rely on intuition, or at least he would strenuously deny such an allegation. To Vance the psychology of murder is an exact science.

This is the type of detective technique that is fairly difficult to bring off with complete success but Van Dine manages it very successfully in this intricately-plotted book. Which is not to say that alibis and other such items so beloved of lawyers are ignored. This is a book with a kind of double solution - Vance’s psychological insights might be able to tell him who killed the Canary but there’s still the annoying difficulty of those apparently unbreakable alibis, and juries do tend to make rather a fuss about unbreakable alibis. As Vance would say, it’s most distressin’.

Philo Vance is perhaps the most divisive of all the great fictional detectives. Readers who dislike him tend to do so with an extraordinary and ferocious intensity, mocking his pretensions to aristocratic breeding, erudition and high culture. His fans are equally passionate in his defence, and love everything about him that the Vance-haters dislike. I personally find him to be highly amusing and thoroughly engaging but I can see how others would respond differently. Van Dine’s writing style is perfectly in tune with his hero so that if you’re a Philophile it increases your enjoyment even further while if you’re a Philophobe it will merely increase your irritation.

If you fall into the pro-Vance camp then this book is of course essential reading being generally regarded as Van Dine very close to the top of his form, an opinion with which I wholeheartedly concur. If you’re yet to sample Van Dine’s crime fiction then this is an ideal starting point. Highly recommended.
Posted by dfordoom at 12:59 AM