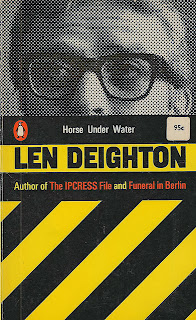 Horse Under Water, published in 1963, was Len Deighton’s second novel and also the second of the four novels that are usually thought of as the Harry Palmer novels, that being the name given to Deighton’s hero (played by Michael Caine) in the film adaptations. In the books the hero remains nameless.

Deighton and John Le Carré are usually considered to have been the originators of a new breed of dark, realistic and cynical spy novels. While Le Carré is the better known of the two today Deighton was at least as good and his novels are essential reading for any self-respecting fan of espionage fiction.

The labyrinthine plot twists of Horse Under Water are typically Deighton. His unnamed spy is sent on a mission about which he has serious misgivings but the purpose of the mission is not what he thinks it is. It is also not what his boss Dawlish thinks it is. In fact nobody seems to be entirely clear about what the mission is really about. Spies are after all as much cogs in the machines of politics and bureaucracy as any other civil servants, and no civil servant expects the decisions of politicians and bureaucrats to make any real sense.

Our hero is sent off to do a Royal Navy diving course and is then off to Portugal to take charge of the operation and of a motley collection of individuals who are supposed to assist him. None of whom he trusts. Finding the sunken U-boat is easy enough. But our hero makes some other discoveries as well, discoveries that lead him to suspect that nothing about this operation is what it seems to be. And just as he starts to work out what might be going on he finds that there are further wheels within wheels and further layers of duplicity to unravel.

Deighton’s hero does not have the luxury of having someone like Q to fit him out with all sorts of high-tech gadgetry. He works for the real British government of the 1960s, cash-strapped and penny-pinching. He isn’t even issued a gun although Dawlish does hint in a roundabout way that if he were to take his own gun a blind eye would be turned, on the assumption of course that he is careful not to use it. That’s par for the course although our hero does think it’s a bit much that he has to fork out his own money for the diving gear he will need. He’ll get his money back, on the assumption of course that he will be able to return it to the Royal Navy diving school in undamaged condition.

There are several potential villains, none of whom turn out to be what they seemed to be. The potential villains on the spot in Portugal are worrying enough but there are also political strings being pulled back in London. There seem to be an awful lot of people with an interest in that sunken U-boat. In fact the interest in the U-boat strikes the unnamed spy  as being very curious. Why would so many people be interested in a totally obsolete submarine that has been sitting on the sea bed since 1945? It’s a relic from a war that has been over for almost twenty years. What secrets could it possibly contain that would be relevant now?

This is spy fiction of a very different kind from James Bond. There’s relatively little action and when acts of violence do occur they come unexpectedly. That’s not to say that it’s dull. There’s plenty of tension and plenty of suspense as the plot twists and turns. There’s danger, but it’s a brooding menacing kind of danger, it’s danger that can take the characters (and the book’s readers) off their guard.

Deighton was slightly unusual in that he didn’t always stick to the Cold War themes that were usual in 1963. In a 1960s Deighton spy novel enemies were not always found in the expected places. Spies are not always set to watch enemies; sometimes friends need even closer watching.

Deighton’s style suits his subject matter. It’s unheroic, often matter-of-fact, and occasionally humorous (in a black sort of way). His world of espionage is entirely lacking in  glamour and also in passion. People sometimes get killed but no-one gets emotional about it. As his hero explains to his girlfriend (who works for the same intelligence agency) there is no room for vendettas or for emotional feelings about the job in this world. If an agent gets killed that’s just part of the job. Deighton’s genius is that he could make this very unglamorous world so fascinating.

Horse Under Water is superior spy fiction from one of the masters. Highly recommended.
Posted by dfordoom at 11:10 PM