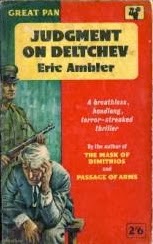 Englishman Eric Ambler (1909-1998) was one of the most important 20th century writers of spy fiction. While writers like John le Carré have been praised for introducing a greater degree of realism and grittiness to espionage fiction Ambler was in fact the pioneer of the realistic spy novel.

His novels Epitaph for a Spy, The Mask of Dimitrios and Journey Into Fear are quite rightly considered to be classics of the genre. Ambler’s postwar novels have received less attention, for reasons that have more to do with politics than with the quality of his later work. Like so many intellectuals in the between-wars period Ambler was attracted by socialism and was sympathetic to the Soviet Union. The Nazi-Soviet Pact of 1939 brought  him to his senses and he became increasingly anti-communist.

Judgment on Deltchev was published in 1951 and was the first of Ambler’s post-war spy thrillers. The plot was inspired by the notorious show trials in the Soviet Union in the 1930s, used by Stalin to destroy any and all opposition.

Ambler’s thrillers almost always feature amateur spies, usually very reluctant ones. In this case an English playwright named Foster has been sent to a Balkan state now under communist rule (and Soviet domination) to cover the trial of a man named Deltchev. Deltchev had been the leader of the Agrarian Socialist Party. The country is now ruled by the communist People’s Party. Deltchev is the most credible opposition figure and so he must be destroyed.

Foster understands that the trial will be a mere sham and he also understands that foreign journalists like himself will be severely limited in what they can say about the trial, at least until they have left the country (by which time it will be too late). He has been assigned a kind of minder, a shabby and thoroughly unprepossessing individual named Pashik. Pashik’s own views on the trial are unknown. Pashik makes sure that his views on every important subject are unknown. He intends to be  survivor.

Foster finds himself drawn into a bewildering web of plots and counter-plots. He makes the mistake of allowing his personal feelings to influence his actions. He knows that Deltchev’s wife and daughter are manipulating him for their own ends, he knows the People’s Party government is manipulating all the foreign journalists for their own ends, and he knows that Pashik is playing his own game. Foster had been naïve enough to believe that the issues were simple, and that Deltchev is an innocent victim about to become a martyr. But the more Foster finds out the less he understands. It becomes disturbingly apparent that some of the charges against Deltchev may have some foundation in truth, and that Deltchev may in fact have had links with the notorious Officer Corps Brotherhood, a shadowy organisation accused of fascist leanings and believed to be responsible for countless assassinations.

Now Foster finds himself a pawn, but in whose game?

Ambler’s approach to spy fiction is slightly reminiscent of Graham Greene’s, with a similar flavour of betrayal, failure, corruption and cynicism. Pashik could quite easily be an inhabitant of Greeneland. Despite its darkness Judgment on Deltchev is also highly entertaining with considerable suspense and a plot with enough twists and turns to satisfy any aficionado of the spy novel. Ambler’s spy stories are to a large degree character-driven but he certainly did not neglect either plotting or atmosphere.

An important work by one of the grandmasters of the spy story. Highly recommended.
Posted by dfordoom at 4:15 AM