James Gunn's Deadlier Than the Male 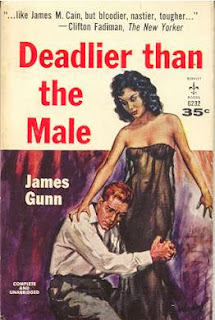 Deadlier Than the Male opens with a murder, or rather two murders. Helen Brent, a beautiful woman in her early thirties who is in Reno to get a divorce, discovers the bodies. She really has no connection whatsoever with the two victims or their slayer but she will come to have a very close connection with the latter.

Helen has no money of her own but expensive tastes. Her half-sister Georgina has lots of money. Georgina meets a man named Sam Wild. Sam is obviously no good but he is just as obviously attractive in an animal sort of way and she marries him.

The initial murders took place in Mrs Krantz’s boarding house. Both Mrs Krantz and her daughter Rachel will become involved in the lives of Helen, Georgina and Sam Wild in very unexpected ways. Sam’s sister Billie and his equally no good friend Mart will also become involved in this extraordinarily convoluted story. A shady psychiatrist will also figure in this tale.

The identity of the murderer will be crucial, but not in the way you would expect in an ordinary detective story. Two of the characters will attempt to unravel the mystery, but for very different motives.

The plot involves quite a few coincidences but while this is usually a plot weakness this is such an odd book that it isn’t a weakness. Characters are brought together in ways that might defy the laws of probability but in ways that satisfy other laws. Such as the laws of chemical affinity. Such combustible characters combine as readily and a inevitably as combustible chemicals.

Deadlier Than the Male could be described as an inverted murder mystery, one in which we know the identity of the murder right from the start and in which the plot is mainly concerned with the means by which the murderer is brought to justice. But it isn’t, not really. Whether the ending can be considered as having anything to do with justice is an open question which I won’t pursue for fear of revealing spoilers. It’s certainly not a detective novel in any widely understood sense of the term. There is certainly a murderer and there are two characters who attempt to establish the murderer’s identity but this was clearly not Gunn’s principal interest.

It could be described as a surrealist novel, or even an absurdist novel. Any writer who could write a scene such as the crucial scene that takes place on the sand dunes in this novel can certainly not be considered a realist writer.

This is a character-driven book, at least insofar as any of the characters can be regarded as real people. They are in some ways representative of types, or even of particular passions or drives. This incredibly bleak book delves into some very dark and very ugly corners of the human psyche. Some very unpleasant motivations are examined with stark precision.

The pseudoscience of psychoanalysis was becoming fashionable at the time and while there are no easily identifiable overtly Freudian it’s highly likely that Freudianism was at least one of the major influences on this book. Perhaps you could call the book absurdist surrealist Freudian hardboiled noir.

It is in no way a pleasant read but it is fascinating in a bizarre, morbid and very unsettling way. Gunn’s style is as extreme and as offbeat as his plotting.

This is psychological noir at its darkest. Recommended if your tastes run to fairly extreme noir fiction.
Posted by dfordoom at 4:12 AM