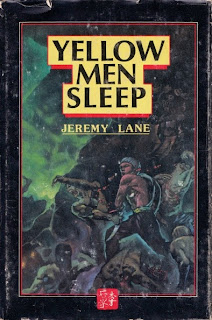 Jeremy Lane’s lost world fantasy story was first published in the pulp magazine All-Story Weekly as The Fragrant Web in 1919. The following year it was published in book form as Yellow Men Sleep.

In form it’s a fairly typical lost world story although this one has no elements of the supernatural nor of the fantastic apart from its basic premise of a lost civilisation.

Con Levington is a petty criminal whose life is changed forever when he counters Andrew March and his father Stephen. Stephen March had journeyed deep into Asia many years earlier, into the heart of the Gobi Desert. His son had attempted a similar expedition years later. It cost him his wife and his daughter. Now, twenty years later, Andrew March will return to the trackless wastes of the Gobi, this time in company with Con Levington.

Con does not realise at first that Andrew will be accompanying him. He sets out on the journey alone, armed only with a parchment map he stole from a mysterious Chinese known as Chee Ming. On board ship to the Orient Con encounters a beautiful female thief. She has stolen baggage belonging to Chee Ming. Chee Ming has meanwhile stolen back his parchment map. Getting the map back will be Con’s first difficult task and gaining the cooperation of his female thief acquaintance will be as much a hindrance as a help.

On reaching China Con sets out across the Gobi. He has now opened his sealed instructions from Andrew March. It transpires that both March and Con Levington have been employed by the US government, their mission being to discover the source of a new and potent and frighteningly addictive drug known as koresh. Once they know where the drug comes from the US government intends to undertake a punitive expedition to cut off the drug at its source. But Andrew March’s reasons for undertaking this trek into the Gobi have nothing to do with the US Government. He is on a private mission of his own.

March and Levington reach their destination, a lost civilisation known as Tau Kuan. It is a strange civilisation based on bizarre ideas of racial melding, and based also on slavery, cruelty and the seductive horrors of koresh. Andrew March finds what he was seeking but having found it discovers that he has no idea how to deal with it. Levington also finds something that he was seeking, although he did not know he was seeking it. Both March and Levington will discover their destinies in Tau Kuan, and their destinies will be deeply entwined with the fate of a beautiful princess, a princess who means a great deal to both men, although what she means for each of the men is very different.

Despite its initial publication in a pulp magazine this is a story with surprising literary aspirations. These aspirations are not always successful, but they are there nonetheless. The style is not what you would normally expect from the pulps. Lane has endeavoured to give his tale a rather dreamlike quality, a quality that is in keeping with a story in which the drug koresh plays a central role, koresh being a drug that brings seductive but deadly dreams.

This is not quite a typical story of the clash between eastern and western civilisations, the lost world of Tau Kuan being not at all typical of eastern civilisation. Tau Kuan is a strange flowering of its own, an exotic plant that may well be as much a threat to the east as it is to the west.

This is less an action adventure story than it is a kind of dream quest, although there is certainly adventure along the way.

Yellow Men Sleep is not entirely successful although it is certainly interesting with a flavour very different from that of most stories of this type. If you’re prepared to accept it on its own terms you might find it worthwhile, although I did not really find it to be to my personal taste.
Posted by dfordoom at 5:53 AM