The Mystery of 31 New Inn 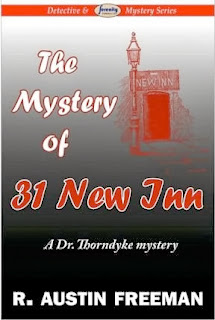 The Mystery of 31 New Inn, published in 1912, was one of R. Austin Freeman’s early Dr Thorndyke mysteries. It serves as a rather excellent illustration of Freeman’s methods and aims.

Dr Jervis is an underpaid and overworked general practitioner currently serving as a locum  when he is called out to a rather odd case. A man is ill but he is very reluctant to consult a doctor and will do so only on condition that the doctor should know neither his identity nor his address. This peculiar condition is enforced by the curious method of conveying Dr Jervis to the patient’s home in a closed four-wheeler cab that has had the windows replaced by wooden shutters so that the doctor has no idea of the address to which he has been driven.

When he arrives he finds a still more puzzling situation. The patient is introduced as a Mr Graves but given the conditions imposed by the messenger who brought Dr Jervis the medical practitioner assumes that this is not his real name. The patient shows all the classic signs of morphine poisoning but the German gentleman, Mr Weiss, who appears to be caring for him assures Dr Jervis that this is absolutely impossible. Dr Jervis’s suspicions are thoroughly aroused but not knowing the patient’s real name or his address there seems to be nothing he can do.

Dr Jervis asks his friend Dr Thorndyke for his advice. He and Thorndyke had been medical students together but Thorndyke is now practising as a barrister, having more or less pioneered the field of combined medico-legal practice. Dr Thorndyke’s combination of medical and legal training has already allowed him to solve a number of very difficult cases and his practice is flourishing to the extent that he persuades Dr Jervis to read for the Bar himself so that he can join Thorndyke’s practice as his junior counsel.

Thorndyke is currently engaged on an apparently impossible task. A Mr Jeffrey Blackmore has died leaving a very troublesome will. There is no doubt as to the genuineness and the validity of the will, but there is equally no doubt that the wording of the will is such as will frustrate the testator’s obvious intentions. It seems utterly hopeless but as a last resort Mr Blackmore’s solicitor has asked Dr Thorndyke for his opinion, and much to the solicitor’s surprise Dr Thorndyke is keen to take on the case despite its evident utter hopelessness.

R. Austin Freeman (1862-1943) claimed to have invented the “inverted detective story” in which the identity of the criminal is known from the beginning of the story, the interest of the story deriving from the methods used by Dr Thorndyke to prove the criminal’s guilt. The Mystery of 31 New Inn is not a story of this type but it nonetheless resembles the inverted detective story in that the principal interest of the tale is the extraordinarily intricate means by which Dr Thorndyke unravels the two mysteries with which he is faced and ultimately reveals the identities of the perpetrators.

The solutions to the mysteries will not come as any great surprise to the reader, but at the same time the reader will be struck by the fact that proving these cases in a court of law would be next to impossible. Needless to say Dr Thorndyke is not the least bit dismayed by the apparently formidable difficulties he faces.

The emphasis on the methods of the detective rather than on the mystery itself differentiates Freeman’s crime fiction from those of the so-called golden age of detective fiction. In some ways Freeman’s stories are more like very early examples of the police procedural sub-genre although focusing on the methods of a detective who is not an official police detective. Dr Thorndyke can scarcely be described as an amateur detective however. His medical and legal training make him in some respects at least as much of a professional as any official police detective of the time.

Freeman’s methods might suggest a rather dry style but that would be an unfair assumption. Freeman has a fluent and generally pleasing prose style. Dr Thorndyke is very much in the Sherlock Holmes mould - he is both brilliant and supremely egotistical. His investigative powers are so far superior to those of Dr Jervis that the reader cannot help wondering what possible use Dr Jervis could be to him in his practice, other than perhaps to make the coffee. In fact Dr Jervis’s sole reason for existence is to serve as Dr Thorndyke’s Dr Watson, narrating his cases and giving Dr Thorndyke someone to whom to explain the plot.

Dr Thorndyke’s solutions are undeniably brilliant but despite Freeman’s claims that they are entirely plausible and possible they may strike the reader as stretching credibility just a little. Nonetheless The Mystery of 31 New Inn is a thoroughly entertaining detective story with (for me at least) the bonus of the kind of Edwardian background that I find so engaging. I’m a sucker for any stories involving hansom cabs.

Highly recommended.
Posted by dfordoom at 10:06 AM