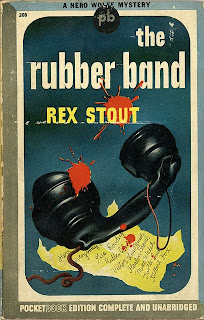 The Rubber Band, published in 1936) was the third of of Rex Stout’s Nero Wolfe mystery novels.

The Rubber Band sees our gargantuan detective taking on a case with roots that go back to 1895. In that year in the rather wild Silver City a group of young men involved in gambling and other similar pursuits had earned the name the Rubber Band. Their leader was a man known as Rubber Coleman, hence the name of his followers. One member of this band had gone a little too far and had found himself facing the hangman’s noose. His escape from this unpleasant fate was a close-run thing and in the process of escaping he had incurred a debt. This debt must now be paid.

The connection between the events of 1895 and an accusation of robbery against an attractive young woman employed by the Seaboard Products Corporation is far from obvious but if this had been a straightforward case it would hardly have fallen within the ambit of Nero Wolfe.

The range of possible suspects is considerable and things are complicated by the apparent absence of any motive and by a murder that seems to confuse things even further. Wolfe is not investigating the murder as such; he has been retained in relation to the recovery of a debt. While the difficulties involved suggest that success is unlikely the fee is more than generous. In fact Nero Wolfe’s cupidity is at this point in time less pressing than usual owing to the fact that his bank balance is in a very healthy condition indeed. But a hundred thousand dollars is a hundred thousand dollars. You can buy a lot of orchids with that amount of money.

The police are taking a keen interest in the case due to the involvement of a senior British diplomat, an involvement that could cause considerable inconvenience to the US government.

As usual the story is related by Wolfe’s trusted lieutenant Archie Goodwin. Wolfe’s usual assistants, Saul Panzer and so on, are all at hand.

Wolfe’s eccentricities were well-established by this time. The pursuit of justice (or the earning of a very fat fee if you prefer) is not going to be allowed to interfere with Wolfe’s attention to his plant rooms. His domestic arrangement are however somewhat dislocated, even to the rather shocking extent of having a woman under the roof of the brownstone on West 35th Street. Even more alarming is the appalling prospect of possible interruptions to Wolfe’s dining habits.

The character of Nero Wolfe is of course one of the chief attractions of this series. Rather unusually Wolfe’s Dr Watson, Archie Goodwin, is almost as entertaining as Wolfe himself. This novel is populated with a colourful cast of supporting characters.

With Stout’s lively and amusing style and skillful plotting it all adds up to sparkling fun. A great entertainment from an era when murder could be both civilised and enjoyable.
Posted by dfordoom at 5:00 AM