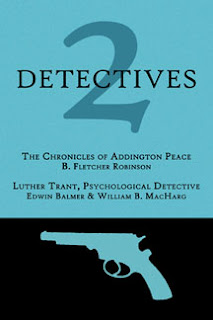 The first Luther Trant detective stories of Edwin Balmer and William B. MacHarg were published in 1909, followed by several more in 1910 in a collection called The Achievements of Luther Trant. They are of exceptional interest in being the first detective stories in which psychology is used in an objective and rigidly scientific way to solve crimes. Coachwhip Press have collected all the Luther Trant stories under the title of Luther Trant, Psychological Detective.

Luther Trant is a young psychologist at an American university. Under the direction of the celebrated Dr Reiland he has been conducting experiments to measure imperceptible physical changes that occur in the body under the stress of great emotion. These techniques are intended for use in diagnosing mental disorders but Trant has come to the conclusion that these same techniques could be used in criminal investigations. These tests can provide conclusive proof as to whether a subject is telling the truth, and can also provide incontrovertible evidence that a subject has a strong emotional response to other pieces of evidence for a crime. These tests can measure physical changes over which a subject has no control and they are accurate even in the case of subjects who have trained themselves to give away no visible evidence of such emotions.

Trant believes these techniques could revolutionise police work. So far however police forces had shown no interest in these developments, even in Germany where the scientific study of psychology is particularly advanced. American psychologists had been making great strides in the first few years of the 20th century but the police have reacted with indifference.

In the first of these stories, The Man in the Room, Luther Trant gets an unexpected opportunity to put his theories to a practical test when the university treasurer is found dead, having apparently committed suicide to avoid exposure over irregularities in the university accounts. Trant is able to establish that the treasurer’s death was not suicide but murder, and he is able to identify the murderer.

Trant’s spectacular success in this case gains him considerable publicity and encourages him to strike out on his own as a consulting detective. His reputation grows by leaps and bounds as he solves a series of cases that have baffled the policemen and he soon gains a crucial ally in the person of Inspector Walker.

Trant’s cases are extremely varied and encompass other crimes besides murder. While Trant’s arsenal of scientific devices are his chief advantage over conventional detectives he is also (being scientifically trained to a high degree) a man with a keen and incisive and very logical mind. He is in fact a natural detective, but one with an important technological edge over all other detectives in the United States in 1909. Trant does not use psychology intuitively - he relies on his instruments and his observations to furnish him with absolutely objective scientific evidence.

While R. Austin Freeman while also at about this time taking a more scientific approach to detective fiction Luther Trant’s methods, while being every bit a scientific as Dr Thorndyke’s, make use of quite different areas of science.

This might sound a little dull but that would be a very unfair supposition. The authors have a lively style which strikes a perfect balance between literary polish and a free and easy and quite exciting style.

The stories are not only an original variation on the detective story as it existed at the time, they were also perfectly timed, psychology being a field that was attracting more and more public interest at that time. The authors are careful not to repeat themselves by having their psychological detective use the same methods in every case. Luther Trant seems to have a bottomless bag of scientific gadgets and manages to make use of a slightly different method in each case. The overall psychological approach remains constant but the authors ring the changes with considerable dexterity.

Luther Trant is no dry and dusty academic. He is an athletic and lively young man possessed of abundant energy and immense enthusiasm. He also has a very zeal for his work. He believes that the unscientific methods of the past have led to countless convictions of innocent men and women while allowing numerous guilty parties to escape scot-free. He is a crusader but he is neither humourless nor fanatical. He is also rather likeable.

The stories are of a consistently high quality with The Empty Cartridges and The Chalchihuitl Stone being especially impressive. The latter story is the only one that takes us into the realm of what today would be called the paranormal but in 1909 many paranormal phenomena were still considered to be scientifically quite plausible. The Red Dress deals cleverly with the effects of emotion on the testimony of eye-witnesses. The Man Higher Up has some of the element of the thriller genre. The Fast Watch sees Luther Trant uses psychology to break an unbreakable alibi. And in The Chalchihuitl Stone he tackles an impossible crime.

These are highly entertaining and well thought-out detective stories and Coachwhip Press deserves our gratitude for making these forgotten gems of the detective story art available to us. They are paired with The Chronicles of Addington Peace (which is also quite a good collection) in one of Coachwhip’s excellent 2 Detectives volumes.
Posted by dfordoom at 4:03 AM