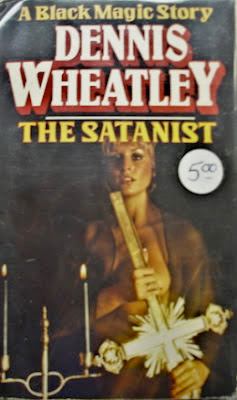 I know I should be embarrassed by my fondness for Dennis Wheatley’s fiction, but I’m not. We all need our guilty pleasures. It remains a mystery how Wheatley could be, as recently as the 1970s, one of the world’s top-selling authors. And then his audience simply vanished.

The book of his that I’m reading is The Satanist, one of his black magic potboilers. And great fun it is. Those dastardly Satanists are conspiring again, this time with the communists, and it’s not just human sacrifice and unspeakable perversions that are on the agenda. They’ve got their hands on a H-bomb.

It’s all done in Wheatley’s usual style, although with more sex than in his earlier books (this one dates from 1960). Much of the time you get the feeling that for Wheatley the evil satanic rituals were just an excuse to get the female characters naked. But interestingly enough, the lead female character is a very strong character, and very sympathetically portrayed although she’s an ex-prostitute. And he isn’t judgmental about her past. And he displays a surprisingly tolerant attitude towards sex in general, when you’d expect quite the opposite from someone with a reputation as an arch-reactionary. It’s these weird contradictions that make Wheatley so fascinating from my point of view.

He was very pulpy, and delightfully hysterical with his crazy conspiracy theories. Even Mulder would have considered this guy to be a bit wacky, but I enjoy his stuff.
Posted by dfordoom at 9:34 PM