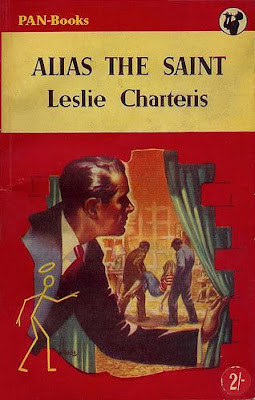 Leslie Charteris is now all but forgotten, but for much of the 20th century he was an immensely popular author, and the adventures of his fictional hero Simon Templar, known as The Saint, could be followed in radio serials, a succession of B-movies in the 1940s (initially starring the delightful George Sanders, and later Sanders’ brother Tom Conway), a 1960s TV series, another TV series in the 1970s, and several 1960s movies.

Charteris, who was born in Singapore, was in fact half-Chinese and half-English. He later an American citizen (although this involved a considerable struggle on his part because of the racist immigration laws of the time).

Alias the Saint is one of the earlier books featuring Simon Templar, and came out in 1931. It actually comprises three novellas. It differs from most English crime fiction of that time in that the hero is (despite his name) morally somewhat dubious. He was at one time an out-and-out criminal, and although he’s now on the side of the angels (mostly) his methods are often only marginally legal, and at times clearly illegal. In some ways the stories are a cross between detective fiction and adventure stories. They’re fun in their own way, and Templar is a charming and rather likeable rogue.
Posted by dfordoom at 9:53 PM