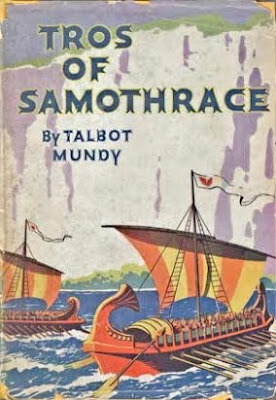 Talbot Mundy (1879-1940) is a little-known writer today, which is unfortunate. He was not only one of the masters of the adventure tale but a major force in the development of pulp fiction. He contributed to pulp magazines such as Adventure and Argosy and wrote 45 novels.

He was born in London but emigrated to the United States where he launched his literary career.

Tros of Samothrace, published in 1925, was the first of three novels chronicling the exploits of its hero Tros, the son of Perseus, Prince of Samothrace. Perseus is a high-ranking member of a mystical cult with international connections. The cult is not described in detail in the first novel but one of its key features is the renunciation of violence. That proves to be rather problematical when they encounter Julius Caesar, a man not renowned for renouncing violence. Perseus and Tros become captives of Caesar.

Tros agrees to go to Britain to ascertain the chances of success of an invasion, and if possible to persuade the Britons of the uselessness of opposing Caesar’s will. If his mission succeeds Caesar will release his father.

Tros does not quite share his fathers view’s on violence. He believes in avoiding bloodshed if possible, but if forced to do so he will most certainly fight and will prove himself to be a formidable warrior. Despite his differences with his father Tros is a minor functionary of the cult. The cult has links with druidism which will be useful to Tros in Britain.

Tros intends to obtain his father’s release but he has no intention of persuading the Britons to submit to Caesar. Far from it. He exhorts them to resist the Romans and to trust no promises they may make. He forges an alliance with Caswallon, a British king who has his capital at Cair Lunden, a bustling little town on the River Thames. Caswallon is an able leader although his attempts to unite the various British tribes meet with mixed success. One of Caswallon’s greatest assets is his wife Fflur. Apart from being an intelligent and resourceful woman she is gifted with the second sight.

Urged on by Tros Caswallon is determined to contest Caesar’s invasion, an invasion that is now imminent. The resistance to the Roman invasion as well as the daring scheme devised by Tros to not only rescue his father but to exact a measure of vengeance on the Romans occupy most of the book.

Mundy had ties with the Theosophy movement so the novel is an odd but interesting mixture, a stirring adventure tale with a subtle mystical tinge to it. There are no overt elements of the supernatural, save perhaps for Fflur’s gift of prophecy, but Tros’s vaguely spiritual and/or philosophical beliefs do play a role in the story and there is certainly a hint of destiny taking a hand.

Talbot Mundy’s work influenced such luminaries of pulp fiction as Robert E. Howard and Tros of Samothrace can be seen as one of the precursors of the sword & sorcery genre. The influence of an earlier generation of pulp writers, such as Mundy, on the the better-known pulp writers of the 20s and 30s is often overlooked.

Mostly though it’s a fine piece of adventure fiction as the Britons aided by Tros battle the Romans by land and sea. Thoroughly enjoyable, and recommended.
Posted by dfordoom at 1:17 AM