Honey West: This Girl For Hire 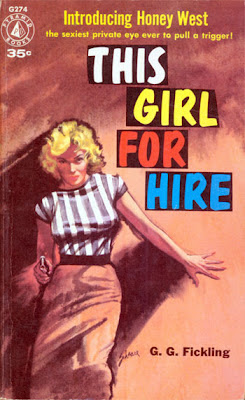 This Girl For Hire, published in 1956, was the first of eleven Honey West crime thrillers written by Gloria and Forrest E. Fickling under the name G. G. Fickling. The Honey West character is probably better known these days from the 1960s Honey West TV series starring Anne Francis in the title role.

The back cover blurb memorably describes Honey West as the nerviest curviest private eye in LA, with the sleuthmanship of Mike Hammer and the measurements of Marilyn Monroe. That gives a pretty accurate picture of the kind of book this is - it’s trashy, pulpy fun.

Honey’s father was a PI who was murdered and Honey then took over the business. She’s not quite a female Mike Hammer but she does her best. She’s not as violent but she has the attitude and she’s sufficiently adept at judo and street fighting to handle herself pretty well. She packs a .32 revolver but she uses her feminine wiles more often than she uses her gun.

When she needs to find out if a bunch of guys are heroin users she needs to get a look at their arms, so she does the obvious thing - she challenges them to a game of strip poker. OK, that’s not what Mike Hammer would do, but he’d probably approve. And since she’s a good card cheat she figures they’ll end up losing their clothes before she does. It almost works, if only she hadn’t drawn that lousy deuce in the last hand. And maybe it would have been a better idea if she’d started off wearing more than one item of clothing.

The case she’s working on involves the sleazy world of network TV. Former matinee idol turned loser Herb Nelson ekes out a living playing bit roles on TV, including the popular Bob Swanson Show. Now he’s convinced that Swanson is trying to kill him so he engages Honey West to keep him alive. She soon discovers that Herb Nelson is not the only one who thinks someone is trying to kill him, and that just about everyone working on the show would like to murder at least one other person involved with the show.

And apparently these TV people do more than just talk about murder. Corpses start to accumulate at an alarming rate. Honey has landed herself a job on the show, as an actress. She can’t act, but with a figure like hers nobody cares if she can act or not. The only trouble is that she might turn out to be the next victim.

The plot is outrageously convoluted and as the body count rises it gets more convoluted.

Honey is not your classic fictional detective. She doesn’t wait for the evidence to mount up. She plays hunches. At one stage or another she manages to suspect every single character in the book. And she’s not the type of detective to keep her hunches to herself - as soon as she suspects someone she comes right out and accuses them. While she breaks most of the rules for fictional detectives one can’t help suspecting that maybe real-life detectives actually operate more like Honey West than Sherlock Holmes. And she’s nothing if not dogged, and she does get there in the end, and gets there before her pal Mark, the homicide cop.

There’s a fair bit of implied, and even overt, sleaze. Honey is definitely attracted to the male of the species. The violence is fairly graphic for its time as well.

This is very much pulp detective fiction. Great literature it ain’t but it’s entertainingly trashy.

Honey West did represent a definite departure for detective fiction. There’d been plenty of female fictional detectives but she is certainly one of the earliest examples of the hardboiled female PI. Well, relatively hardboiled. Honey is a tough cookie but she’s a lady. Having been written in the 50s it doesn’t need to bludgeon us with political correctness but if you’re looking for crime novels featuring a tough capable woman detective and you don’t mind the very pulpy stye you could do worse than check out the Honey West books. This Girl For Hire is good trashy fun.
Posted by dfordoom at 12:20 AM