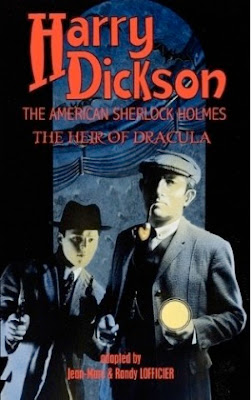 I’ve now read the the whole of Harry Dickson: The American Sherlock Holmes. This book contains three complete episodes from the French pulp series (each being approximately novella-length) plus one short story.

The Harry Dickson stories were immensely popular in France, rivalling the popularity of other fictional heroes such as Sherlock Holmes and Arsène Lupin. The genesis of this character is a complex and fascinating story. It starts with a series of Sherlock Holmes pastiches published in German pulp magazines from 1907 to 1911. Some of these early tales were translated into French. Then in 1927 a Dutch publisher started releasing translated versions of the original German stories but with the detective’s name changed to Harry Dickson (presumably out of fear that Conan Doyle might take legal action).

From 1929 to 1938 French translations of these Dutch translations were published with enormous success. The great Belgian fantasist Jean Ray was responsible for many of these new versions. Harry Dickson’s popularity was maintained for many decades after this and there were plans for a Harry Dickson film in 1966 which was to have stared Dirk Bogarde as the title character. Harry Dickson retains a strong following in France and there have been recent graphic novel versions.

Apart from the much pulpier tone the key difference between these stories and the Sherlock Holmes stories that originally inspired them is that the Harry Dickson stories incorporate major elements of the literature of the fantastique. There are vampires, aliens, monsters from mythology, talking parrots, people turned (literally) into statues, mad scientists and vast conspiracies.

In The Heir of Dracula a serial killer is behind bars and awaiting execution (thanks to Harry’s earlier efforts), but Harry has grave doubts as to whether these crimes have really been solved. And why is the condemned criminal so anxious that his execution should go ahead as scheduled? And what is the link to the activities of a certain notorious eastern European nobleman named Vlad Țepeș, with whom the legend of Count Dracula originates. Is it really just a legend?

The Iron Temple is much more pulpy and outlandish. Talking parrots, strange inhuman monsters concealed in ancient buildings, visitors from the stars and a vast underground city all add up to large amounts of silly fun with plenty of breathless excitement and delicious shudders.

The Return of the Gorgon suggests that Medusa and her sisters, the gorgons of mythology, may have a real-life counterpart. Mythology, art, marine biology and crime all play a part in this outrageously entertaining tale.

The Curse of the Crimson Heart is more science fictional in its basis but just as over-the-top.

These are stories that combine some dazzling flights of imagination with pulpy crime thrills. Highly recommended.
Posted by dfordoom at 9:47 PM