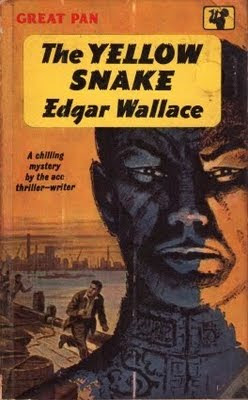 The Yellow Snake is a delightfully trashy and outrageous 1926 thriller by Edgar Wallace.

As you might gather from the title this time Wallace is dealing with the Yellow Peril. To be more specific, a nefarious Chinese secret society known as the Joyful Hands.

Stephen Narth is a crooked British merchant banker. He has been speculating with client’s money, and needs to find £50,000 to keep out of prison. Suddenly salvation seems to be at hand. A distant relative, Joe Bray, has made a fortune from mining and trading in China and has unexpectedly left his fortune to Narth. Only there are complications. Bray’s will stipulates that in order for this fortune to come his way Narth must ensure that one of his daughters should marry Bray’s mine manager Clifford Lynne.

Stephen Narth’s daughters, Mabel and Letty, are very anxious to marry money but they take one look at Clifford Lynne and refuse to have anything to do with the scheme. He has a long bushy beard, is generally unkempt and dresses eccentrically. And he is, after all, a mere employee of their distant relative. They come up with a clever plan - the will actually stipulate that Clifford should marry a female member of Narth’s family, not necessarily a daughter. So they will force their penniless cousin Joan Bray to marry the uncouth mine manager.

Joan agrees and it’s soon clear she’s made a rather good bargain - once he’s cleaned up Lynne is actually quite good-looking. And he’s not a mere employee. In fact he owns considerably more of the Yun Nan Concessions than Joe Bray does. He is immensely wealthy. He’s certainly eccentric but Joan has already decided that he’s rather fascinating.

Salvation hasn’t come quite in time for Stephen Narth - he needs the £50,000 immediately. Now another benefactor appears on the scene - the fabulously wealthy Oxford-educated Chinese businessman Grahame St Clay (whose real name is Fing-Su). He lends Stephen the money he needs, but this loan very definitely comes with strings attached. The unlucky banker is now well and truly in Fing-Su’s clutches and is hopelessly involved in the conspiracies of the Joyful Hands.

Fing-Su’s immediate objective is to obtain one of the 49 founder shares in the Yun Nan Concession. These are the only shares with voting rights and he already has 24. Once he has control he intends to use the company’s immense wealth to finance a very ambitious plan. He is aiming at nothing less than control of China. He is of course quite mad.

To get this share from Clifford Lynne he needs to exert some pressure, and he decides the best way is by threatening Lynne’s intended bride.

There are countless further plot complications including several murders and kidnappings and a horrific initiation ritual that Stephen Narth must endure. Clifford and Joan find themselves menaced at every step by ruthless assassins.

it goes without saying that this is a very politically incorrect book, if that’s something that bothers you.

It’s all outlandish to the highest degree and it’s tremendous fun. Wallace is these days very unfashionable indeed, something that I find quite mysterious. His thrillers are always entertaining and colourful and he is surely ripe for rediscovery. The Yellow Snake is a total hoot.
Posted by dfordoom at 11:24 PM