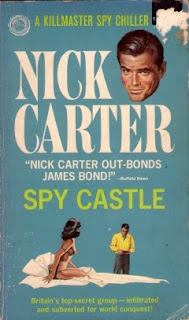 Nick Carter is one of the more long-lived characters in detective and espionage fiction. He first appeared in a story in 1886, was later the subject of a series of pulp novels in the 30s and then metamorphosed into a James Bond-style secret agent in the 60s.

The Killmaster series of spy novels eventually ran to some 260 novels with new titles still appearing as late as the 1990s. No author is ever credited for any of these books which were written by a variety of hands, and apparently quite a considerable number were written by women. Which is interesting since the Nick Carter spy character is very a macho action hero and a tireless womanizer.

I recently read one of these novels, a comparatively early entry in the series, published in 1966. Spy Castle is a classic mad scientist threatening to blow up the world tale, a plot that was used over and over again during the 60s in both books and movies. But Spy Castle does add an interesting twist. The mad scientist/diabolical criminal mastermind is also the head of a fascist paramilitary movement, called The Druids. At this point the book taps into the whole Scottish/Welsh nationalist thing which was attracting quite a lot of attention in Britain at this time. The Druids not only stand for Celtic nationalism, they also promise a return to the good old days of King Arthur!

It’s an outlandish plot, especially given that The Druids are also in league with the Red Chinese.

The violence and the sex are considerably more graphic than in the Bond novels. It goes without saying that Nick Carter’s bedroom skills prove just as useful as his spy skills in foiling the fiendish plot of The Druids and their unbalanced leader. The evil mastermind’s wife, Lady Hardesty, has slept with so many men that she’s lost count, but it takes Nick Carter to finally bring her sexual satisfaction. It’s all so outrageous and so over-the-top and so silly that it’s impossible to find it actually offensive although it would be fascinating to know if this was one of the novels with a female author.

Probably the most surprising thing about Spy Castle is that it’s a good deal of fun, in a very very pulpy sort of way.
Posted by dfordoom at 11:50 PM