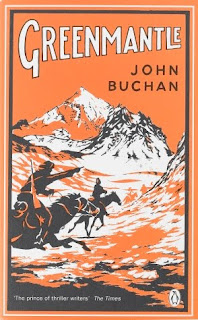 Since it’s been rather quiet I’m going to repost some brief pieces that I posted elsewhere quite a while ago.

John Buchan's Greenmantle is a combination spy thriller/swashbuckling adventure tale. It was written in 1916, and concerns a diabolical plot by those dastardly Germans to wreck the British Empire.

Richard Hannay is the man selected to foil this nefarious scheme. To do this he must enter Germany, in the guise of an Afrikaner mining engineer. The tone is very Boys' Own Adventure. The only significant female character is the diabolical Hilda von Einem. Richard Hannay would much rather be back with the chaps in his regiment in France in a mud-filled trench being shelled night and day than have to spend an evening in feminine company. You know where you are with chaps. Hannay is awfully brave, though, and you just know the wicked Boche aren't going to get away with their wicked plots.

While it's easy enough to mock this sort of book, on the plus side it's fast-moving and action-packed and quite entertaining if you're in the right mood. And I am very partial to diabolical plots, and I do have a weakness for spy fiction. Buchan in fact is a kind of link between the old-fashioned swashbuckling tale of intrigue and adventure, the Three Musketeers kind of thing, and the modern spy novel. He wrote a number of books featuring Richard Hannay, the best-known being of course The 39 Steps. And giving credit where it's due, even though the book was written at the height of the war Buchan doesn't portray the Germans or their allies the Turks as universally monstrous and brutal. Buchan's characters are certainly colourful, and they have more complexity than you'd expect.

If you have a taste for adventure stories or for spy thrillers then Greenmantle is excellent entertainment.
Posted by dfordoom at 4:35 AM