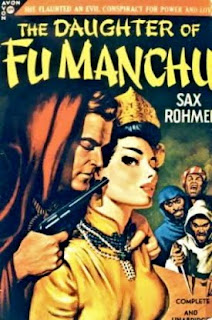 The Daughter of Fu Manchu, published in 1931, was the fifth of Sax Romer’s novels featuring the fiendish but brilliant Dr Fu Manchu.

Fu Manchu was one of the first diabolical criminal masterminds in fiction, and remains one of the most interesting of the breed. While the books have often been accused of racism Fu Manchu is in fact a rather complex character. It’s made clear that he is a man of honour, a man of his word. And on some occasions he even finds himself on the same side as his arch-nemesis Nayland Smith. It’s also made clear that he is a man of vast intellectual gifts.

At the beginning of The Daughter of Fu Manchu it is assumed that Dr Fu Manchu himself is dead, although there are those who have their doubts as to whether such a man could really have ben killed. Strange events are unfolding in the Egyptian desert at an archaeological site. The leader of the expedition, Sir Lionel Barton, has died mysteriously but his assistant Greville (who is the narrator of the story) receives a message indication that perhaps Sir Lionel is not really dead.

Greville has confided in Dr Petrie, who sees uncanny similarities to earlier cases in which Dr Fu Manchu was involved. But surely he can’t still be alive? Dr Petrie can’t help wishing he could talk to his old friend Sir Denis Nayland Smith, a man who knows more about Fu Manchu than any man alive and who has been responsible for foiling several of his fiendish schemes. But no-one seems to know where Nayland Smith is.

Of course, as the title indicates, our heroes soon find themselves engaged in a battle of wits with the Lady Fah Lo Suee, the daughter of Fu Manchu. She is almost as brilliant as her father, and every bit as dangerous and ruthless.

There are corpses that are not really dead, ransacked tombs, exotic poisons, vast conspiracies and ancient secret societies as well as a variety of fanatical religious assassins. Rohmer’s style is pulpy and breathless! With lots of exclamation points! But he knows how to tell an exciting story.

And the stories have both a fascinating villain and a colourful hero who is just as much of a larer-than-life figure as the villain.

SaxRohmer (1883-1959) wrote many books aside from the Fu Manchu books, including some rather good horror, and also the Sumuru series (a kind of female version of Fu Manchu). But it’s the Fu Manchu novels for which he is remembered. They’re great fun if you can accept their lack of political correctness (and that’s something you have to do for most of the pulp and popular genre fiction of the first half of the 20th century).
Posted by dfordoom at 5:46 AM