From Russia with Love, Ian Fleming 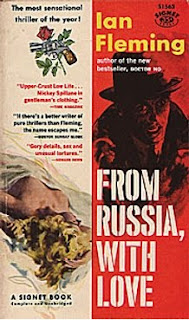 Recently I’ve found myself involved in an extraordinary number of discussions on the topic of James Bond, and more specifically on the subject of Ian Fleming’s original novels. Since it as years since I’d read any of the novels I got hold of a copy of From Russia with Love (one of the bond novels that I’d never read) and sat down and read it.

Fleming’s spy novels are not quite as I’d remembered them. While they certainly emphasise a fairly glamorous and action-packed side to espionage I found this one to be darker than I’d remembered.

And while the 1960s espionage thrillers of people like John le Carré and Len Deighton were in many ways a reaction against the glamorous depiction of spies it’s worth pointing out that Fleming was just as obsessed as they were with making the background as authentic as possible. While an organisation like the Soviet SMERSH (an acronym for Death To Spies) which served as Bond’s nemesis sounds lie something goofy the author made up it wasn’t. SMERSH really did exist.

One thing that was more or less as I’d remembered it was Fleming’s somewhat bizarre attitude towards women. It’s long been rumoured that Fleming’s sexual tastes were a trifle outré. The scene where the two gypsy girls must fight to the death to decide who gets to marry the man they both love tends to support this.

But once again it’s not quite that simple. The mistakes Bond makes in this adventure come about because he is unable to treat the Russian spy Tatiana as a mere sex object. He goes and falls in love with her.

And while there’s a pulpiness to the content at times the style isn’t really pulpy. Fleming was more than just a hack.

Overall From Russia with Love was a rather better book than I’d been expecting. Yes there is sexism there that will make modern readers a bit uncomfortable, but compared to the sexism in some of the other crime and espionage writers of the 50s (Mickey Spillane comes to mind) I think it’s possible to overlook it and still enjoy the ride. The 1963 movie version is one of the best of the Bond films.
Posted by dfordoom at 7:50 AM