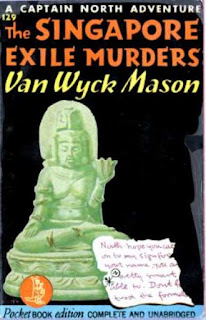 The Singapore Exile Murders was the fourteenth of F. Van Wyck Mason’s long-running and very successful series of spy thrillers featuring Hugh North of G-2, a U.S. Army intelligence officer. It appeared in 1939. Van Wyck Mason was a very strong believer in the virtues of exotic settings.

Captain North is already in a tight spot when the book opens. The British flying boat on which he was travelling from Hongkong to Singapore has run into a severe storm, so severe that it is forced down and takes shelter in the lagoon of a tiny uninhabited island. The aircraft is damaged and once the storm has blown itself out the flight to Singapore will be resumed. The danger is past. Or is it? In fact one of the passengers is destined not to reach Singapore alive.

The unexpected stopover gives North a chance to study his fellow passengers and they’re a more than unusually interesting lot. There are hints that some of them may not be quite what they seem. The wealthy Dutch businessman Barentse seems rather anxious about a big deal he is planning and about which he is very close-mouthed. His part-Javanese dancer girlfriend strikes North as am exceptionally jealous and perhaps even dangerous woman. Joan Buckley appears to be a respectable American girl but there are things abut her that just don’t fit. The White Russian Urbaniev might well be, like most White Russians, involved in plots. The haughty middle-aged Lady Helen Twining-Twyffort has her secrets. And muck-raking columnist Irene Walsh seems to be even better at discovering people’s secrets than the professional intelligence officer North, and discovering people’s secrets can be a risky business.

North is on a case, trying to track down a cashiered U.S. Army officer named Melville who has access to very highly classified material. North is intrigued to note that several of his fellow passengers are linked in some way to Melville.

Murder on an aircraft is an idea that was not used as often as you might expect in the interwar years although of course there were a few celebrated detective novels on that theme.

The first half of the book focuses to a large extent on North’s efforts to find the murderer, since it seems a reasonable assumption that the murder of someone linked to Melville is likely to be the key to finding him. North does discover the identity of the killer and finds that his difficulties have only just begun. The book now becomes more of a spy thriller but with plenty of plot twists still left up its sleeves.

North is a thorough professional but he’s also a man who enjoys the good life. By the good life he means high quality liquor and high quality women, both of which he consumes in large quantities. He is therefore by no means disappointed that there are two beautiful women who seem to be very intimately involved in the case. There is the glamorous part-Javanese dancer Madé Sayu, whose talents run to more than dancing. And there is all-American girl Joan Buckley. One of them might be a foreign agent. In fact both might be spies. Or both might be innocent. Fortunately both make charming companions so North doesn’t mind that he has to get to know them better, strictly in the line of duty of course. He also has to bear in mind that beautiful lady spies can potentially be quite deadly.

Naturally, this being 1939, there’s no graphic violence or sex. There is at times though a slightly grimmer atmosphere than you might expect. There’s some action and plenty of suspense.

The political aspects are interesting. The story takes place during the Munich Crisis in 1938. A major war seems imminent and no-one knows how many countries might eventually be drawn in. For an intelligence agent it’s a time of extreme paranoia. There are spies from several different countries mixed up in the Melville business, including Britain and Japan. The United States is of course at peace with all these countries but when it comes to the world of espionage every nation has to be considered a potential enemy. It’s actually the British rather than the Japanese that North is particularly worried by.

Van Wyck Mason’s spy thrillers are rather more serious in tone than most of the spy fiction of the inter-war years. They’re certainly too serious and too realistic to be regarded as pulp fiction. On the other hand they don’t have the literary pretensions of a Graham Greene or an Eric Ambler story. They are actually quite close in feel to John P. Marquand’s Mr Moto novels (such as Thank You, Mr Moto) although Marquand is a bit more literary and a bit more stylish.

You should also check out Mason’s earlier The Budapest Parade Murders and the truly excellent The Branded Spy Murders.
Posted by dfordoom at 11:57 PM