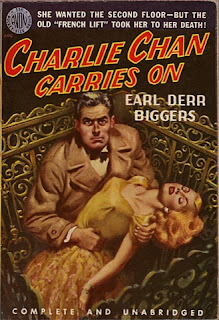 An elderly American man named Drake is found murdered in an up-market London hotel. Mr Drake had been part of an American around-the-world tour group organised by a Dr Lofton. Circumstances suggest that one of the members of the party must have been the murderer.

It’s a tough case for Chief Inspector Duff of Scotland Yard. No-one has a decent alibi and there are several shady characters in the party. A key attached to a watch chain seems likely to be an important clue but discovering just what it is that the key unlocks proves to be a baffling mystery.

With no real evidence there is no way to prevent the tour from continuing but Chief Inspector Duff isn’t giving up. His hunt for the killer will take him to France and Italy and it will take Detective-Sergeant Welby to Calcutta and thence to Yokohoma. And the tour part will leave a trail of corpses behind it.

But what has all this to do with Charlie Chan? Nothing at all. At least, nothing at all until a fateful day in Honolulu (well over halfway through the book) makes this a case for Detective Inspector Chan of the Honolulu Police Department. And a case with an unexpected very personal significance for Charlie. And it now becomes a classic shipboard mystery story. All the possible suspects are on board the ship steaming from Honolulu to San Francisco and Charlie has six days to discover which one is the killer.

Charlie is not sure whether to be pleased or appalled that he will have the assistance of Kashimo on the trip. Kashimo is a young Japanese Honolulu P.D. detective renowned for his ability to bungle the simplest tasks. Charlie tolerates him for two reasons. Firstly, his bungling is largely due to inexperience and excessive zeal. And secondly, for all his faults there is one aspect of police work at which Kashimo excels. When it comes to conducting a search he is very close to being a genius. He can find a clue that no other living policeman could find. And Kashimo will find just such a clue on this voyage.

I’m a huge fan of both shipboard mysteries and murder stories set in exotic locales and this one scores highly on both counts.

Charlie Chan Carries On was famed by Fox in 1931 with Warner Oland as Chan. Unfortunately this is now a lost film. One of the later Sidney Toler Chan films, the excellent Charlie Chan’s Murder Cruise, was also loosely based on the novel.

Despite their immense popularity in their day the Charlie Chan novels don’t (in my opinion) get as much respect as they deserve. Perhaps Biggers’ premature death in 1933 has something to do with this. Charlie Chan Carries On is not quite as good as The Black Camel but it’s still highly recommended.
Posted by dfordoom at 6:33 AM