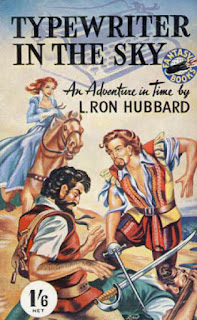 Typewriter in the Sky is an intriguing and unconventional 1940 science fiction/fantasy/adventure novel by L. Ron Hubbard (1911-1986).

Yes, that L. Ron Hubbard. The inventor of Dianetics, the founder of the Church of Scientology. Everyone knows that Hubbard was a science fiction writer but it’s easy to fall into the trap of assuming that he was probably a bad science fiction writer and that nobody apart from Scientologists bothers to read his novels, or should bother to read them. And the fact that people tend to have very strong views on the subject of Scientology makes it very hard for them to approach anything he did without either idolatry or extreme hostility. In fact feelings on the subject can run so high that it might be advisable at this point for me to state that I am not a Scientologist, I know very little about Scientology and I have no particular axe to grind one way or the other.

The truth is that, leaving Scientology aside, on the evidence of Typewriter in the Sky Hubbard was a very good and very interesting science fiction writer. And he was also a highly successful one.

Typewriter in the Sky is a clever and very unconventional novel. The ideas that Hubbard is playing around with have become quite familiar having been used many times since. It has to be kept in mind that when Hubbard wrote this novel in 1940 those ideas were fresh and wildly original.

Horace Hackett is a pulp writer. Like most pulp writers he works in various genres but he is best known for his adventure stories. He has received a generous advance from his publisher Jules Montcalm for his latest potboiler. Being a writer he naturally spent the money immediately.

Hackett’s problem is that he has not actually written the novel. He has not even started writing it. He has not even given the matter any real thought. And now his publisher wants the manuscript and he wants it yesterday. If not yesterday, then he certainly wants it now. Montcalm confronts him in his apartment, where he’s idly chatting with his buddy Mike de Wolf, and demands to be given at the very least an outline of the plot. Hackett has to think fast and he bluffs his way through by making up an outlandish plot on the spot. Montcalm is particularly anxious to know about the villain. Since Hackett does not yet have a villain he bluffs again by constructing a villain, a Spanish admiral named Miguel de Lobo, based on his buddy Mike.

And then Mike suddenly finds himself wading ashore on a Caribbean island with dim memories of standing on the poop deck of his flagship which has just fought an unsuccessful action against English pirates. When confronted by a couple of pirates on the beach he dispatches them with his rapier. Which is odd because a moment ago he was unarmed. Mike is taken in by a beautiful young woman, the daughter of the English governor of the island, but the locals want to hang him as a damned Spanish Papist. In 1640 the English were not fond of Spanish Papists. For it seems that Mike is no longer in the year 1940 but the year 1640.

The other odd thing is a strange sound that he hears in the sky. It almost sounds like a typewriter.

It’s a good premise but what’s really impressive is how cleverly and how wittily Hubbard exploits it. The reader is in on the joke right from the start. Hubbard is not trying to bamboozle the reader - it’s poor Mike who is bewildered. He knows from the start that he’s become a fictional character but he doesn’t know the rules. Is he a mere puppet, dancing to Hackett’s tune? Does he have any actual control over the outcome of events? Can he determine his own destiny? Is he even speaking his own lines or just the lines that Hackett feeds him? Of course the question of how much control we have over our destinies applies to all of us to some extent, not just fictional characters. Maybe we’re all just playing parts written for us by a typewriter in the sky. The problem is that we’re never sure if we’re playing a rôle in a farce or a tragedy, or just a meaningless pulp tale cranked out by a hack writer.

Hubbard explores these existential questions but he never gets pompous or tedious about it. It’s clever and occasionally quite thought-provoking but the tone remains playful. Life is just a pulp fiction story so why get worked up about it?

The basic idea had been tentatively explored in experimental fiction but I think it’s true to say that Hubbard was the first to see its potential for a science fiction story. And although these ideas have been tackled many times since I don’t think they’ve ever been done with quite such lightness of touch.

Typewriter in the Sky is both an adventure story and a parody of adventure stories, both an existential tale and a science fiction tale, and it works equally well on all these levels. It’s amusing and intelligent and immense fun. Very highly recommended.
Posted by dfordoom at 5:23 PM