The Avenging Saint (AKA Knight Templar) 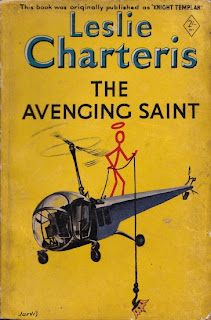 The Avenging Saint (originally published in 1930 as Knight Templar) is one of Leslie Charteris’s early Saint novels. The character was already well-established and Charteris was on a roll by then.

Leslie Charteris (1907-1993) was born in Singapore. His mother was English while his father was Chinese. He was brought up and educated in England. He moved to the US in 1932 and later became an American citizen.

The Simon Templar of the novels is rather different from any of his incarnations on either the big screen or the small. He is tougher and much more ruthless and has considerable less respect for the law. The very earliest Saint stories certainly imply that Simon Templar had been an out-and-out criminal, albeit one with his own quirky code of morality. If he was going to steal he preferred stealing from other crooks.

By 1930 he is established as one of the good guys, but one who prefers to take the law into his own hands, and his kind of justice is somewhat rougher than the kind handed down at the Old Bailey.

Charteris’s debt to Sapper’s Bulldog Drummond stories is very obvious in this novel. Like Captain Drummond he has his band of followers although by this time it has been reduced to a single side-kick, Roger Conway. The Saint even has the same rather childish sense of humour as Drummond (this was one of the elements toned down in the TV and movie versions and that is perhaps a good thing). Like Drummond the Saint doesn’t bother with ordinary run-of-the-mill criminals - he likes to go after diabolical criminal masterminds, and fortunately England was apparently awash with such types in the interwar years.

In The Avenging Saint there is once again a criminal conspiracy so ambitious that it threatens the very survival of western civilisation. If it succeeds it will plunge Europe and probably the world into war. It’s the kind of conspiracy that the authorities would almost certainly regard with scepticism so Simon and Roger will have to save Europe on their own. Which suits Simon down to the ground, he being the type who would find it impossible to work with any kind of professional law-enforcement agency.

As well as saving the world Simon Templar also has to save a millionaire’s daughter who has been caught up in the machinations of the diabolical criminal mastermind Rayt Marius.

The Avenging Saint is a sequel to an earlier novel, The Last Hero (which in common with many of the early Saint books was also published under a bewildering array of alternative titles). It shares the same diabolical criminal mastermind, the delightfully evil and unhinged Rayt Marius. In The Last Hero Charteris explains the villain’s plot in considerable detail but in The Avenging Saint he keeps it rather vague. He had presumably realised by this time that whatever the details of the conspiracy it was essentially a McGuffin, serving merely to put in train the series of adventures. It was the action that counted and Charteris supplies that in prodigious quantities, culminating with Simon Templar boarding a train from an aircraft while the aircraft is airborne.

The first Saint stories were essentially crime stories but The Last Hero saw Charteris moving into the thriller arena with international intrigue and with much more extravagant plotting and even a hint of science fiction.

Most of the Saint stories were short stories or novellas but Charteris has no particular problem coping with the longer format of the novel.

The Avenging Saint displays the Charteris formula to perfection - basically an insanely unlikely romp of a plot done very much tongue-in-cheek and with a great deal of flair. It’s immense fun and is highly recommended.
Posted by dfordoom at 9:32 AM