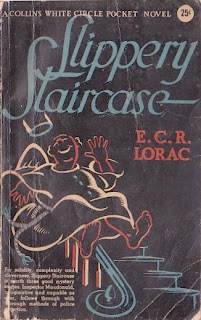 Martia Vannery, the daughter of a famous artist, owns a large Regency house in London. The house has been divided into a number of flats with Martia retaining the ground floor and studio. While a party is in progress in the studio the body of an elderly woman is discovered at the bottom of the staircase leading to her attic flat.

When the police arrive on the scene they find what is apparently a clear-cut case of accidental death. In fact the evidence at the scene appears to make any explanation other than accidental death completely impossible. There’s just one tiny thing bothering Inspector Robarts - the two people who discovered the body gave conflicting evidence about the discovery. This small detail is enough to bring Scotland Yard into the case, and Detective Chief Inspector Macdonald believes that despite the overwhelming evidence in favour of accidental death the case is worth further investigation.

Macdonald is a Scot and a very dogged one. He has infinite patience when it comes to unravelling a complicated case and this case is nothing if not complicated.

This book is a fine example of two of the major obsessions of golden age detective fiction - apparently unbreakable alibis and apparently impossible crimes. The murder method in this case is exceptionally bizarre and unusual. If all this is not enough Lorac also throws in secret staircases!

The breaking of the seemingly air-tight alibis depends on split-second timing. Whether one of the residents of the house arrived home at 3.19pm or 3.20pm becomes an important matter. Macdonald’s unveiling of the murder method involves timing a series of complicated manoeuvres down to the very second.

You might think this obsessing over seconds would stretch credibility a little, and you’d have a point. Nonetheless the plot is most certainly ingenious.

The suspects are an assortment of fairly interesting characters all of whom seem to have something to hide.

Slippery Staircase is an entertaining example of the detective fiction of the golden age and it’s definitely worth a look.
Posted by dfordoom at 5:45 AM