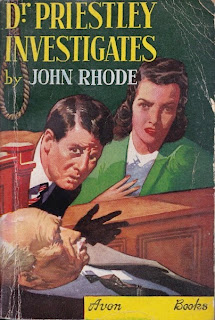 Cecil John Charles Street (1884-1965) wrote no less than 140 books, most of them detective novels, under a variety of pseudonyms. This impressive output included dozens of Dr Priestley mysteries, all written under the name John Rhode. For the sake of convenience I will refer to the author by this name. Dr. Priestley Investigates (this is the US title of a book originally published in the UK as Pinehurst) was one of his earlier efforts, appearing in 1930.

This novel starts with an apparent crime that turns out to be very different from that suggested by initial appearances. A drunk driver is pulled up and in the dickey seat of his car is found a body with a rug draped over it. Superintendent King of the Lenhaven Police believes he has found a satisfactory explanation for this odd occurrence and the case appears to be closed. That is, until Dr Priestley takes a hand. A serious crime has certainly been committed but it is merely the culmination of a series of criminal acts  stretching back over nearly a decade, crimes which even include piracy!

The ingredients are certainly there for a lively and engaging tale and that’s more or less what we get.

Rhode was one of the writers dismissed by critic Julian Symons as the Humdrum School. That’s a little unfair but it has to be admitted that Dr Priestley (in this novel at least) is a remarkably colourless detective. In fact the most interesting character in this tale is the dead man the discovery of whose body starts the initial investigation.

Rhode might be a little weak in the area of characterisation but he could certainly construct the kind of intricate plot that readers of that era demanded. The plot is both complex and colourful. Much of the action takes place in a very unusual setting - a beached yacht.

Dr Priestley relies more on purely intellectual deduction than on physical clues although there are a couple of such clues that do prove to be important. And Rhode is, when the occasion demands, prepared to have a detective crawl about on his hands and knees examining tyre prints (although in his case the procedure is carried out by a secondary investigator, Chief Inspector Hanslet).

Mention of Chief Inspector Hanslet brings up an interesting feature of the book. It does not quite follow the familiar pattern of having an amateur detective single-handedly solving the case while official police detectives flounder about uselessly. Both Superintendent King and Chief Inspector Hanslet play important roles in unravelling the mystery. In that respect the book combines features of the police procedural with the more common (at the time the book was published) amateur detective story. Rhode rather neatly manages to have the best of both worlds - his official police detectives have the advantage of being able to  call on the vast resources of the police force while his unofficial detective has the advantages of freedom of action and time for purely intellectual reflection.

Rhode gives us rather more action that we would normally expect in this style of detective story. There are no less than three gun battles, not to mention piracy on the high seas. At times the reader could be forgiven for thinking that he’s picked up a thriller by mistake.

The only real flaw I can find in this tale is that the main detective, Dr Priestley, could have been made a bit more memorable and distinctive. It may well be that the author has deliberately made him somewhat on the bland side, a practice that was not uncommon at the time and represented a reaction against the Sherlock Holmes type of colourful and eccentric sleuth, a type that often ended up dominating the story at the expense of the plot (it’s worth remembering that the careers of Conan Doyle and John Rhode overlapped).

Dr. Priestley Investigates is an entertaining novel that demonstrates that the writers of the “Humdrum School” were often far from humdrum. Recommended.
Posted by dfordoom at 5:55 AM