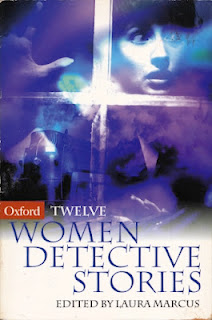 Interestingly, most of the writers were male but lady detectives enjoyed quite a vogue in the late 19th and early 20th centuries (a vogue that continues to this day).

As with any anthology the quality is variable but most of the stories are pretty good.

The weakest entry is Gladys Mitchell’s A Light On Murder, a very dull lighthouse murder tale from 1950 (and the most recent story in this volume). But it’s really the only dud story here. Arthur B. Reeves’ The Clairvoyants is a failure but at least it’s an interesting failure, an attempt to combine a story of confidence tricksters with Freudian mumbo-jumbo. Stories involving fake spiritualists usually appeal to me but this one seems rushed and the ending is too pat.

Anna Katharine Green's An Intangible Clue is also a little on the dull side besides being a trifle silly.

That’s the bad news. The good news is that the other nine stories are pretty good.

There are some well-known writers here and some obscure ones, although many of the latter were quite well-known in their day. Baroness Orczy is among those who remain justly famous and her contribution is a Lady Molly of Scotland Yard story, and a very good one - The Man in the Inverness Cape.

Fergus Hume is remembered today mostly for his novel The Mystery of a Hansom Cab. His contribution is one of his tales of the gypsy detective Hagar, certainly one of the most unusual and quirky detectives featured here.

The earliest story in the collection is the anonymously authored The Mysterious Countess from a collection called The Revelations of a Lady Detective. Written in 1861 it is not just the first appearance of a female detective but dates from the earliest years of the detective story when the genre was only just beginning to take its modern shape. The heroine, Mrs Paschal, goes undercover. A mastery of disguise was of course a vital necessity to any nineteenth century fictional sleuth.

These are not all murder stories. Catherine Louisa Pirkis’s Drawn Daggers (despite its lurid title) is not a tale of murder but it still presents a challenge to Miss Brooke which she solves with her customary skill.

Hugh C. Weir’s The Man with Nine Lives tells of an unfortunate man who has survived no less than eight attempts on his life but the famous detective Madelyn Mack with discover that all is not as it seems. For my money this is one of the strongest entries in the anthology.

Grant Allen’s The Cantakerous Old Lady strikes a lighter note and is entertaining and rather charming.

L.T. Meade and Robert Eustace were an interesting male and female literary team and Mr Bovey’s Unexpected Will is fun, as are most of their stories.

Henry Cecil’s On Principle rounds off the anthology with a cynical but amusing twist and provides a suitable end point since it feels far more modern than any of the other stories.

These stories mostly date from a time when female fictional detectives were expected to be both ladylike and feisty. They rely mostly on their wits although at least one of the Victorian lady detectives has cause to regret that she lefty her trusty Colt revolver at home.

On the whole quite a strong anthology and certainly worth picking up.
Posted by dfordoom at 2:30 AM