The Ka of Gifford Hillary 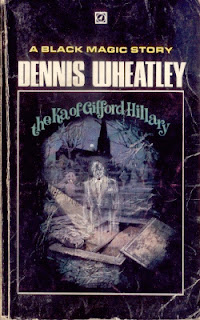 Dennis Wheatley’s The Ka of Gifford Hillary, published in 1956, is one of the “black magic” novels for which he was most famous although in fact the majority of his very large literary output consisted of non-occult thrillers. While there is no black magic as such in this book there are certainly supernatural, or at least paranormal, forces at work here.

Sir Gifford Hillary is the chairman of a large shipbuilding firm. He is asked by the Minister for Defence to undertake on an unofficial task. The Minister is convinced that the security of the United Kingdom can only be assured by a complete reliance on nuclear weapons and to fund the building of such weapons economies will need to be made in other areas of defence spending. For one thing, the Royal Navy will need to be abolished. Hillary’s job will be to help in creating a political climate favourable to such a drastic change.

Sir Gifford has other problems closer to home. His beautiful wife Ankaret has had many affairs. Sir Gifford has learnt to deal philosophically with the situation. Ankaret is a passionate woman whose physical needs are considerable but she loves her husband and he tolerates her infidelities. But now Ankaret has created a very awkward situation. Sir Gifford has a scientist named Owen Evans living in his house, a scientist who works for his shipbuilding company but also pursues his own pet personal projects, which at the moment consists mostly of working on a death ray. Ankaret has no intention of sleeping with the scientist but she has been flirting with him rather outrageously and now he has become obsessed by her. So obsessed that he has determined to murder Sir Gifford. Which he does. And Sir Gifford has the unsettling experience of watching his own murder.

Gifford Hillary is dead, but to his surprise he is still very much around. He assumes that this strangely ghostly existence means that he is in fact a ghost but the truth is much stranger than that. It appears that the ancient Egyptians were right - a person has not just a soul but several distinct spiritual essences, one of which is the ka. And now Sir Gifford’s ka has become not just a spectator at his own murder but will be the observer of many other disturbing events.

He will watch his wife murder the lustful scientist and then calmly forge a letter in his own handwriting placing the blame on Sir Gifford. Sir Gifford is not angry at her for this. After all he’s dead so she’s not doing him any harm and he rather admires her presence of mind in coming up with such a clever way of evading the law.

Hillary will also become a witness to a communist plot to assassinate the Defence Minister and a series of misadventures (partly his fault) that threaten to ruin the career of his nephew. He has two children of his own by his first marriage (Ankaret was his second wife and was much younger than her husband) but frankly they don’t like him and he doesn’t like them. His nephew has become more like a real son to him.

Hillary can see these events happening but he cannot intervene or make contact with anyone. But somehow he has to foil the communist plot and save his nephew’s career. And perhaps there is a way he can influence events. He has an idea of how this can be done but it will prove to be an exceptionally difficult task. Being dead is rather a big disadvantage but Hillary is resourceful and he isn’t giving up. The results of his efforts will lead him to a shocking discovery about his own death.

It all sounds very silly, and it is, but that was never a problem for Wheatley. He was no great literary stylist, his books suffer from certain characteristic structural faults and his characterisation was pretty sketchy but there was no doubt of his ability to come up with bizarrely fascinating plots that worked in spite of their outlandishness. And there was certainly no doubt of his ability to tell an enthralling story.

One of the characteristic faults of Wheatley’s writing was his propensity for indulging in lengthy digressions on the subjects of his favourite political hobbyhorses. Wheatley’s political views are unfashionable today but he gave a great deal of thought to politics and was often unnervingly prescient. His political conspiracy theories were elaborate and ingenious and enormous fun. He was never afraid of pushing his conspiracy theories too far - he pushed them as far as he possibly could.

The book starts a little slowly - Wheatley was never in a hurry - but once the plot really gets going the tension becomes truly nail-biting. Quite apart from the annoyance of being dead everything seems to conspire against Gifford Hillary. Hillary however is not a man to allow death to stop him from doing what he has to do.

There’s actually considerably more to Hillary’s death and his subsequent ghostly existence  than meets the eye but I don’t intend to spoil what is definitely one of Wheatley’s cleverest plots.

It’s both a political thriller and a supernatural thriller. While Wheatley did not write horror as such, his Black Magic books being more accurately described as occult thrillers, there are certainly some effective and very macabre horror moments in this one.

Wheatley is always good trashy fun, with plenty of excitement and a dash of sex, and The Ka of Gifford Hillary is immensely entertaining. Highly recommended.
Posted by dfordoom at 6:42 PM