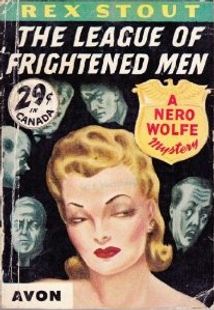 The League of Frightened Men was Rex Stout’s second Nero Wolfe mystery novel, published in 1935. And it has a few features that make it slightly unusual for a golden age detective tale.

Nero Wolfe is engaged by a Dr Hibbard, a prominent psychologist who fears he is about to be murdered. He has no doubt whatsoever of the identity of his would-assassin. In fact two of his friends have already been murdered by the same man.

Twenty-five years earlier a tragic accident had occurred at Harvard University. A hazing prank went badly wrong and a freshman was badly injured. Dr Hibbard had been one of a considerable number of more senior students who had been involved. The victim of the accident, Paul Chapin, had been left severely crippled. It is strongly implied that Chapin’s injuries left him more than just a physical cripple, that as a result of the accident (whether for actual physical reasons or for psychological reasons) Chapin has never been able to have normal sexual relations with women.

The students who had been involved were filled with remorse, naturally enough. They had been practising what they believed was a harmless prank and they had ruined a man’s life. They formed what they referred to as a League of Atonement. Since that time they have been supporting Paul Chapin financially.

Recently Chapin has achieved unexpected success as a novelist. He no longer needs their financial assistance. And now it appears that he has set in train a belated campaign of vengeance. A few months earlier one of the members of this League of Atonement, a judge, had been killed in a fall from a cliff. The similarity with Paul Chapin’s accident (his injuries had been sustained in a fall from a fourth-floor college window) was initially slightly disturbing but then the members of the league were sent a poem. The poem strongly suggested that Paul Chapin claimed responsibility for the judge’s death and that he intended to kill each and every one of them.

Nero Wolfe makes the members of the league an offer they can scarcely refuse. In exchange for a very large sum of money he will guarantee to remove the threat that Paul Chapin poses to their safety. Each member of the league will contribute an amount dependent upon his ability to pay, ranging from $8,000 in the case of the league’s richest member down to $5 in the case of the poorest. The total amount is just over $56,000. It is a great deal of money (an astronomical amount in today’s money) but Wolfe has no doubt they will accept his offer, and events prove that he is correct.

The members of the league have varying responses to this situation. Some are so badly frightened they just want to see Chapin dead while others, still tortured by remorse, almost seem to feel that they deserve to be killed by Chapin. They also have varying attitudes towards Chapin himself. Some hate him while others still feel sorry for him.

Chapin regards the entire situation with amused contempt. When he calls on Nero Wolfe the great detective recognises that here he has a worthy adversary, a clever but determined man who seems quite capable of carrying out his threats. He certainly appears to be, as Hibbard had suggested, to be a dangerously twisted and dangerous individual, quite possibly a psychopath.

Wolfe is fascinated enough by him to immediately buy and read all his novels. He is motivated by more than curiosity - he believes that Chapin’s books provide the answers he needs.

This interest in abnormal psychology and in the psychological responses of the intended murder victims is certainly unusual in a golden age detective novel. Wolfe’s solution of the problem posed by this situation also depends very much on his psychological assessment of those involve. In this case it’s not just a matter of solving a puzzle (although all the normal puzzle-solving attributes of a typical golden age mystery are present in this story) it is also a matter of solving a psychological conundrum.

Of course it also has the ingenious plotting you expect in a golden age mystery. It goes without saying that the situation is not quite what it appears to be on the surface and Stout has plenty of plot twists up his sleeve.

As usual much of the interest is provided by the character of Nero Wolfe himself. He is one of the most bizarre and colourful of all fictional detectives.

A bit of an oddity and a very ambitious story, especially given that it was only Stout’s second detective novel, but Stout knows what he’s about and the results should satisfy any lover of this type of mystery. Highly recommended.
Posted by dfordoom at 3:22 AM