The Saint Closes the Case 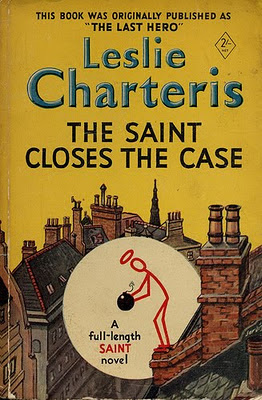 The Saint Closes the Case was one of the fairly early novels of Leslie Charteris featuring Simon Templar, The Saint. It originally appeared in 1930 under the title The Last Hero.

It provides a rather good illustration of the crucial difference between Charteris’s novels and the various movies and television series based on them. The tone is equally jokey but in the books the jokiness alternates with some fairly dark and even grim moments. In this case Simon Templar and his friends face a very major moral dilemma and solve it in a manner far more ruthless than would ever have been allowed in the movies or the TV series.

The Saint stumbles upon a plan by a brilliant but not especially sane scientist to build a secret weapon of immense destructive potential. It’s a weapon that will make the carnage of the First World War seem like a Sunday School picnic. And it’s more than a mere plan. The scientist has built a working prototype.

Simon Templar soon realises that there is a link between this invention and an incident in which he was involved a short time before, when he saved the life of a Central European prince. He also discovers that there are several parties that are anxious to obtain the secret weapon in question and Templar is not at all sure he’s happy with the idea of any of them getting their hands on it.

This adventure will bring him into conflict once more with his old nemesis, Chief Inspector Claud Eustace Teal. It will also force up Simon Templar the disturbing revelation that he has fallen in love in a rather serious way indeed.

The Saint has always had an ambiguous relationship with the forces of law and order. He might be on the side of the angels but he spends a good deal of time on the wrong side of the law. He has a very strong moral code but it doesn’t require him to be overly fastidious about breaking laws that happen to be inconvenient.

The Saint Closes the Case has enough plot twists and double-crosses to keep any thriller fan happy. Charteris’s books are masterful entertainment and this one is certainly highly recommended.
Posted by dfordoom at 7:32 PM