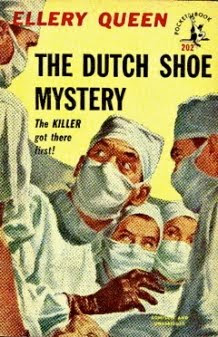 The Dutch Shoe Mystery is one of the very early Ellery Queen mysteries, dating from 1931.

Ellery Queen has gone to the Dutch Memorial Hospital in New York to consult the medical director, an old pal of his, about a murder investigation he’s working on and he soon find himself slap bang in the middle of one of the biggest cases of his career. The founder and patron of the hospital, Abigail Doorn, is wheeled into the operating theatre for urgent surgery and is discovered to be dead. But not of natural causes. She has been strangled.

She is one of America’s wealthiest and most powerful women and her murder sends shock waves through the financial markets as well as the highest strata of society. There are quite a few potential suspects but the only worthwhile clue is a pair of white oxford shoes. Elleey and his father, Inspector Richard Queen, confess themselves to be completely baffled unto, a second murder unexpectedly presents the key to solving the puzzle.

The plot has all the intricacies you expect in a golden age detective tale, and then some. These early books included the famous “challenge to the reader” towards the end, where the reader is informed that all the clues necessary to the solving of the case have now been presented, and there is only one possible solution. It has to be admitted that (once the murderer is revealed) there really could only be one possible culprit. In fact the solution turns out to be annoyingly simple but it’s a measure of the skill of the two authors (Frederic Dannay and Manfred Bennington Lee co-authored the books) that they are able to keep us guessing.

A highly enjoyable read for those who like the elaborate puzzle variety of mystery novel.
Posted by dfordoom at 5:09 PM