Quest of the Dawn Man by J.-H. Rosny aîné 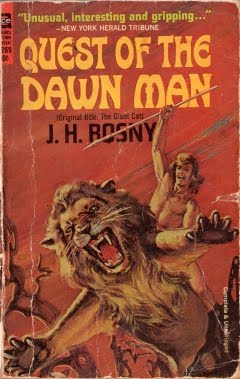 Joseph Henri Honoré Boex and his brother Séraphin Justin François Boex wrote science fiction using the pseudonym J.-H. Rosny. When their writing partnership broke up Joseph continued to write using the name J.-H. Rosny aîné (J.-H. Rosny the Elder). His contribution to the development of the science fiction genre was considerable and he also had a considerable success with his prehistoric adventure novels, including his 1908 novel Quest of the Dawn Man (Le Félin Géant or The Giant Cat).

Rosny’s achievement in this novel was to create a believable depiction of the days of Cro-Magnon Man combined with a gripping adventure narrative and characters who are both convincingly prehistoric and sympathetic characters with whom the reader can find some identification.

Of course nearly a century has passed since the publication of this book but it remains a bold and fairly successful attempt to bring an unknown world to life.

Aoun belongs to the Oulhamr tribe, and is in fact the son of their chief. He is a restless individual and sets off to explore to World Beyond the Mountain, accompanied by his friend Zouhr. Zouhr is the last survivor of his tribe, the last of the Men-without-Shoulders. Aoun is a might hunter and warrior; Zouhr is by comparison physically clumsy and feeble but he is possessed of an active and cunning mind. They make a formidable combination. Formidable enough to be able to take on sabre-toothed cats.

Predators such as sabre-toothed cats are not their greatest challenge however; this comes from the various other races and species of humans and human-like creatures. Some, such as the dhole-men, are implacably hostile. Others, such as the relatively timid Men-of-the-Forest and the Wolf-Women are willing to form alliances with Aoun and Zouhr. Aoun and Zouhr even attempt to form some variety of partnership with completely different species, such as the gigantic cave lion. This is one of the more interesting features of the book, since one of the major survival advantages of primitive humans was their ability to form symbiotic relationships with other species such as dogs and cats.

Aoun will also find love, or at least the prehistoric equivalent of love, with one of the Wolf-Women. Rosny suggests that relations between the sexes may have been more tender than is usually imagined. The close friendship between Aoun and Zouhr, a friendship based on difference rather than similarity, gives another clue as to the the kinds of increasingly complex social relationships that allowed humans to survive and thrive in a hostile environment.

While modern research has undoubtedly rendered much of the detail out-of-date this remains one of the most vivid attempts to bring the life of prehistoric humanity to life.
Posted by dfordoom at 7:34 AM