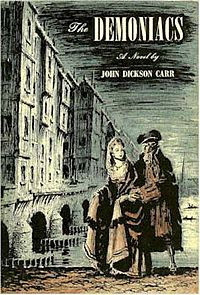 The Demoniacs by John Dickson Carr is an unusual crime novel. The detective is not an amateur sleuth like Miss Marple or Lord Peter Wimsey, nor is he an officer from Scotland Yard. Jeffrey Wynne is a Bow Street Runner, and the year is 1757.

The plot revolves around the murder of an old woman, and the mysteries surrounding the parentage of a young man (Wynne) and a young woman. It’s a good detective story in its own right, but it’s the setting that makes it stand out. This is the London of Hogarth and Fielding, a bustling, brawling, bawdy place, full of life but at the same time rank with filth and filled with footpads, pickpockets and prostitutes, and cheap gin joints. Carr brings this city to life.

Just as interesting as the story itself are the notes at the back. Many of the characters in the book are real-life people (like the blind Bow Street magistrate John Fielding who controlled the Bow Street Runners), and a parson by the name of Laurence Sterne. Most of the locations were places that really did exist in 18th century London, like the houses on Old London Bridge, Mrs Salmon’s Waxworks, the Ranelagh Pleasure Gardens and Hummums, London’s only Turkish Baths. Most of these places have long since disappeared.

An entertaining novel and a vivid glimpse into a period of history that doesn’t get much attention from novelists. Recommended.
Posted by dfordoom at 7:44 PM