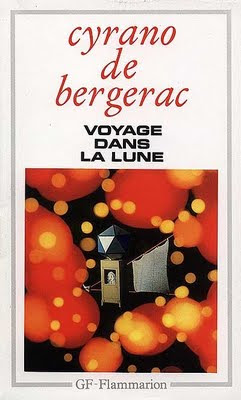 I’m fascinated by very very early science fiction novels and one of the most important of these pioneering works is Cyrano de Bergerac’s Journey to the Moon (or to give it its proper title L'Autre Monde: où les États et Empires de la Lune (The Other World: The States and Empires of the Moon). It was published posthumously in 1657.

Cyrano de Bergerac (1619-1655) was an interesting figure in his own right. He was a successful playwright and a notorious duellist. He is said to have fought at least 1,000 duels. And yes, he really did have a very large nose and this was the cause of many of his duels. He was also a homosexual and a religious sceptic who was accused of atheism.

And to add to all that he was something of an amateur philosopher and scientific thinker.

Like most of the early “fantastic voyage” science fiction tales the intention behind Journey to the Moon was largely satirical. What makes this work really interesting though is that this was by no means Cyrano’s only intention. The book is like a blend of whimsical fantasy, satire and hard science fiction.

Or at least the 17th century version of hard science fiction. Cyrano’s scientific speculations are an intriguing mix of the medieval and the modern. In this context it’s worth remembering that Cyrano was writing several decades before Newton put physics on a firm scientific basis. While Cyrano has no notion that a lack of breathable air might be an obstacle to a lunar voyage he is aware that the earth’s gravitational field is more powerful than that of the Moon.

There’s also some interesting speculation on the nature of reason and on the differences between humans and animals. At times Cyrano almost seems to be moving towards some kind of theory of parallel and divergent evolutionary pathways.

As for the plot itself, this is where the whimsy comes in. Dew is certainly an original idea for a fuel for interplanetary travel! The hero uses this means to reach the Moon, where he finds that the inhabitants of our satellite regard the Earth as their moon. They also have some odd customs and ideas on social organisation. They believe in paying respect to youth rather than age. They find it strange when Cyrano tells them that the inhabitants of Earth wear swords as a symbol of honour - on the Moon they regard phalluses in the way 17th century Europeans regarded swords.

It’s a very short book and while it’s thin on plot and long on philosophical speculation Cyrano’s speculations are generally entertaining. And it’s a fascinating attempt to imagine a society based on fundamentally different beliefs.

If you’re interested in the history of science fiction it’s essential reading.
Posted by dfordoom at 8:43 PM

Email ThisBlogThis!Share to TwitterShare to FacebookShare to Pinterest
Labels: B, science fiction