The Devil in Love, by Jacques Cazotte 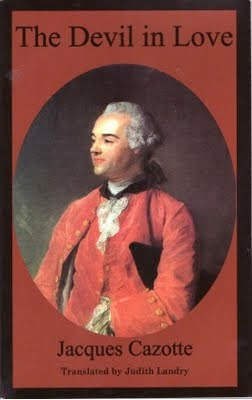 Jacques Cazotte’s The Devil in Love is one of those books whose historical importance possibly outweighs its intrinsic interest. But it’s still an entertaining read.

Don Alvaro is a young Spanish nobleman who dabbles in the occult. He summons a spirit, and gets more than he bargained for. What he gets is Biondetta, a beautiful young woman who claims to be hopelessly in love with him. Biondetta at other times appears as a handsome young page. Don Alvaro can hardy claim that he doesn’t know what he is dealing with, it is clear that Biondetta is not human, but on the other hand she is very charming indeed.

She also solves Alvaro’s financial worries by giving him the ability to win unfailingly at games of chance. His heavy gambling losses are soon made good and he amasses a tidy little sum besides.

Don Alvaro is cautious about becoming involved with Biondetta, and even more cautious when it becomes obvious that she is determined to get him into bed with her. His reluctance to sleep with her actually has more to do with his Spanish pride than any fear of having sexual relations with a woman who is almost certainly a demon. He is unwilling to compromise his honour by sleeping with a woman before they are married, and he will first need his mother’s approval of the union.

Biondetta however is not inclined to give up. And even a Spanish nobleman cannot withstand such a determined siege forever. But can Alvaro succumb to Biondetta’s fleshly charms without risking his immortal soul?

The importance of this novel is of course that we are seeing many ideas that would become commonplace in the literature of the fantastique and of the gothic dealt with for the first time in a work of fiction. While the themes would be explored in greater depth in later works Cazotte’s treatment is interesting in its own right.

Cazotte’s approach to his subject matter is essentially tongue-in-cheek. This is very much an entertainment, a literary bauble created by a witty dilettante.

The book was originally intended to be in two parts but only the first part was ever completed. The second part would have changed the nature of the work rather considerably as it was intended to tell the story of Alvaro’s life as a minion of Beelzebub.

Cazotte pursued a varied but not especially happy career in the Marine Department of the French Civil Service, his health being badly damaged by overseas postings to the West Indies. He became involved with Catholic mystical groups and his support for the Royalist cause led to his being guillotined in 1792.
Posted by dfordoom at 6:39 PM