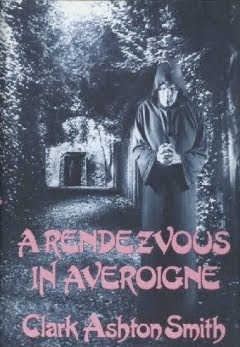 Most of Clark Ashton Smith’s stories are set in imaginary and fantastic worlds. His Averoigne stories are unusual in that they have a real world setting – medieval France, specifically southern France, the land of the troubadours. Of course it’s a medieval France in which sorcery thrives, and creatures such as vampires and werewolves are commonplace.

Some of the Averoigne stories, such as The Colossus of Ylourgne, also come closer to pure horror than almost anything else in Smith’s output. A real world setting doesn’t really suit Smith’s baroque and exotic prose style, although some of these stories do contain hints of other worlds (in fact The Enchantress of Sylaire takes place in a magical realm rather than in Averoigne proper).

The stories that are closest to pure horror are I think the least successful, like The Colossus of Ylourgne and A Rendezvous in Averoigne. That’s not to say that they’re bad stories (a Clark Ashton Smith story of the second rank is still a very good story). My favourite of the Averoigne stories is The Enchantress of Sylaire. It’s a delightful story, in fact a kind of love story. The Maker of Gargoyles is another excellent story.

Emperor of Dreams, published by Gollancz in the Fantasy Masterworks stories includes many of Clark Ashton Smith’s stories (but be careful if buying online because there’s a biography of Smith with the same title). Others of his stories can be found at the admirable Eldritch Dark website. Clark Ashton Smith is close to being my absolute favourite writer, but I don’t really think the Averoigne stories are his best. Personally I much prefer his other story cycles, especially the Zothique cycle, which is I think one of the real glories of fantasy literature.
Posted by dfordoom at 4:48 PM