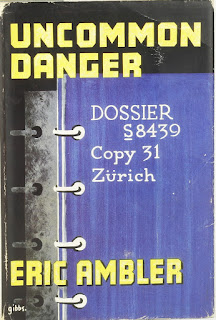 Uncommon Danger (published in the United States as Background to Danger) was the second spy thriller written by Englishman Eric Ambler (1909-1998). It was published in 1937. Ambler is one of the most important figures in the evolution of spy fiction. During the 1930s Ambler and Graham Greene revolutionised the genre. In place of hearty British heroes like Bulldog Drummond Ambler gave us innocents caught up in the dangerous world of espionage. Not quite bumbling amateurs - Ambler’s protagonists are usually reasonably intelligent men but they find themselves hopelessly out of their depth and they must either sink or learn to swim.

The protagonist of Uncommon Danger is a half-Irish half-French reporter named Kenton. Kenton is a free-lancer. This is financially a rather precarious profession and his weakness for gambling makes it even more precarious. Not for the first time in his life he is broke. He heads for Vienna, hoping to borrow some money from an acquaintance who owes him a favour. On the train he encounters a man named Sachs who makes him a tempting proposition - all Kenton has to do is to carry a package over the frontier ands for this very simple task he will receive six hundred marks. Sachs claims to be a Jewish refugee and claims that the package contains securities. Kenton is not a complete fool and it is obvious to him that the story Sachs has been spinning is a tissue of lies from start to finish, but he needs those six hundred marks.

This simple task soon becomes very complicated, with people getting killed. And it’s obvious that there are several groups of people who want that package and they don’t mind how many more people they have to kill.

At this stage Kenton has no idea what is going on but when he’s struck a vicious blow over the head, is kidnapped and then tortured he figures that the people doing this things are probably bad guys. But is the other group tying to get the package the good guys or just another faction of bad guys? Are there any good guys? Are they spies or counter-spies or common criminals or something else?

The package is not just a McGuffin. The nature of the contents of the package is crucial in determining Kenton’s actions. Kenton is not a particularly political person and not even a particularly moral person but there are some things that do offend his moral sensibilities enough to cause him to dig his heels in and even risk his life. Kenton has reached the point in his life when he cannot evade responsibility. 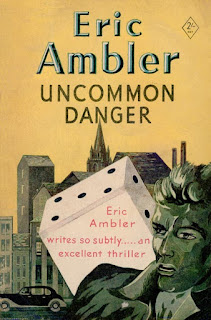 For Ambler espionage and politics were very much entangled. In this story the confrontations between fascism and socialism and liberal democracy form an essential part of the background but there’s more to it than that. Politics is a game that is not played only by politicians - it is also played by Big Business and their ethical standards are even lower than those of politicians. There are also old-fashioned territorial disputes between nations. In this case a long-standing quarrel between Romania and the Soviet Union, complicated by internal Romanian politics. The players in the game that Kenton has stumbled into include oil tycoons and Soviet spies.

As in all of Ambler’s early work it would be a mistake to assume that the Soviets are necessarily going to be the bad guys and it would be an even bigger mistake to assume that respectable British businessman are going to be the good guys. Of course whether the various players are good guys or bad guys they’re all out to advance their own interests so Kenton is not at all sure if he can trust any of them.

This is an Eric Ambler novel so the fact that Kenton has been caught up in the world of spies does not mean that he is instantly transformed into James Bond. He’s a reporter. He is not a tough guy. He is afraid of guns. He does his best. Being a reporter who has spent his career covering central Europe he does at least have some understanding of politics and considerable understanding of human duplicity. Occasionally he even manages to keep a step ahead of the professional spies but he makes lots of elementary mistakes and he has no hope of survival without some help from people who actually know what they’re doing.

This was 1937, a very troubled time. Austria’s future is uncertain. Anschluss hasn’t happened but it’s on the horizon. Poland and Czechoslovakia are engaged in desperate diplomatic manoeuvrings. Everyone is trying to join an alliance, or escape from one. No-one knows whether alliance with Nazi Germany or the Soviet Union would be the safer option. Codreanu’s Iron Guard are awaiting their opportunity in Romania. And for ruthless industrialists there are opportunities for profit. They’re more unscrupulous even than the politicians.

The plot is complex and devious but Ambler doesn’t get bogged down in details. He’s more interested in the psychology of espionage and betrayal than in the minutiae. And he keeps the excitement level high. Terrific entertainment. Highly recommended.
Posted by dfordoom at 9:20 AM