Larry Niven’s A Gift from Earth 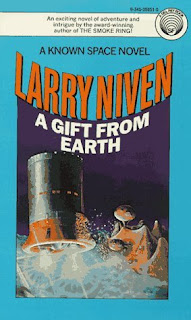 The setting is bizarre but it’s also pretty cool. Mount Lookitthat is a plateau about half the size of California and it roses 40 miles above the surface of a planet that is otherwise about as hostile and uninhabitable as a planet can be. The atmosphere is boiling hot and poisonous and the atmospheric pressure at the surface is crushing.

Why would anyone colonise such a planet? The answer is simple. It was colonised at a time when interstellar travel was in its infancy. It could only be achieved using starships that travelled at around half the speed of light. There being very few star systems  with habitable planets close enough to Earth to be reached by such technology any planet that is even marginally habitable has been colonised.

What’s more interesting even than the planet is the strange social system that has evolved there. The starships (of which there were originally two) that reached the planet each carried a crew of six and fifty colonists in suspended animation. Five hundred years later the descendants of the crew and the descendants of the colonists have become separate social castes. The crew have become a kind of aristocracy ruling Mount Lookitthat with the colonists being more or less the peasantry.

And then there are the organ banks. The technology to extend life to an extraordinary degree exists but it is dependant on a supply of organs for transplants. An enormous supply or organs is required, and an effective system has been devised to provide that supply. Just about every crime, no matter how trivial, is punishable by execution. The executed criminals supply the organs for the organ banks.

It is almost exclusively colonists who are executed and it is mostly (but not entirely) crew who benefit from the organ banks. The system survives because the crew have all the weapons and they control the supply of power to everybody. The colonists naturally are not happy with the system but on the other hand it does keep the crime rate down! And colonists who are coöperative and useful do receive at least some of the transplants.

Everything changes with the arrival of Ramrobot #143 from Earth, bearing a number of very important gifts.

Matt Keller gets mixed up, very reluctantly, with a colonist resistance group known as the Sons of Earth. Matt is very useful to them, and potentially the key to all sorts of possible futures, since he has an odd psionic power.

The political aspects of the story are absolutely central and they’re complex and at times subtle. Niven understands that politics is about power. There are a number of significant political actors in the story. They are motivated by the desire to promote their own group interests, and by a desire for power. Principles are of no interest to them whatsoever. And in this story politics and technology are intricately entangled. One of Niven’s more disturbing ideas is that technology changes morality. It’s not an idea that I’m comfortable with but it has to be admitted that he argues his case pretty well.

One of the curious features of science fiction in its so-called golden age was the interest in psionic or paranormal abilities such as telepathy. Of course back in the 1930s and 1940s such ideas still seemed to be at least vaguely plausible but it surprises me to find such ideas still going strong in a 1968 novel by someone who was at the time one of the rising young stars of the genre. Psionics are of course remarkably useful as plot devices which may be why science fiction writers clung to such ideas so tenaciously.

A Gift from Earth is an interesting and provocative science fiction novel with dystopian overtones. Recommended.
Posted by dfordoom at 1:59 AM