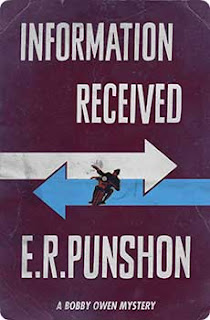 When E.R. Punshon’s Information Received was published in 1933 it was given a rave review by Dorothy L. Sayers. Sayers say the book as exemplifying her own ideas on detective fiction - that literary qualities were vastly more important than such sordid qualities as good plotting. Detective fiction should aspire to be Literature. Sayers was of course completely wrong about this, as she was about most things. But even though it received the Sayers seal of approval I’m still prepared to give Information Received a fair chance.

E.R. Punshon (1872-1956) was an English writer of mainstream fiction who in later life turned more and more towards the writing of detective fiction, including a vast number of novels chronicling the rise of Bobby Owen from the humble police constable of Information Received to the highest ranks of Scotland Yard. Bobby Owen is a university graduate who found himself with prospects so terribly limited that his only options seemed to be to become a schoolteacher or a policeman. He chose being a policeman as being slightly the lesser of two ghastly evils. At the time of the events described in Information Received Owen’s police career has been undistinguished. One might even go so far as to say that it has been impressive in its unimpressiveness.

Now he has what might well be his big break. He is first on the scene when Sir Christopher  Clarke, a big wheel in the City, is murdered. He is even luckier than that, as the formidable Superintendent Mitchell takes a liking to him. Mitchell is favourably impressed that although Owen has made several mistakes common to inexperienced policemen the young constable offers no excuses.

For the most part the possible suspects either have no alibis or alibis that any reader of detective fiction would instantly recognise as rather shaky.

The various suspects - Sir Christopher’s daughter, son-in-law, step daughter, the step daughter’s fiancé, the family lawyer, a business associate and an elderly actor - behave in a manner that almost seems to be calculated to draw further suspicion upon themselves. Some have obvious motives while others have no apparent reason for wanting to murder Sir Christopher. Th question of motives is one to which we shall return.

There are some ingenious touches and one aspect of the murder method is particularly clever. Unfortunately the clue that points most surely to the killer is a clue offered to the reader but it’s a clue that the detectives don’t notice.

The plotting is very problematical. It makes use of a device which was used on occasion by other writer but it’s a device that has always seemed to me to be an outright cheat. It makes it impossible for the reader to fit the pieces of the puzzle together.

A bigger problem is that the two chief detectives, Superintendent Mitchell and Constable Bobby Owen, do not solve the case by actual detection. The solution is presented to them on a platter. Suddenly, right at the end, a great deal of information necessary for the unraveling of the mystery is suddenly pulled from a hat. And the crucial motive, and it really is crucial, is revealed. Everything is clear, but this happens at a point at which Mitchell and Owen have admitted that they cannot solve the case. Then the solution is simply given to them.

As a work of detective fiction I have to rate this one as a failure.

As for Dorothy Sayers’ beloved literary qualities, I failed to notice them. It is competently written. There’s a lot of psychologising which will endear this book to modern critics. Personally I find that that sort of stuff bores me a little. In this particular case it’s rather overwrought and melodramatic, more what I expect in a Victorian sensation novel. I actually like Victorian sensation novels and I like melodrama but it seems a bit out of place here.

I don’t really think Information Received quite works as a detective novel and as Literature I can’t imagine anyone other than Dorothy L. Sayers being excited by it.

It’s a much-praised book. Obviously others have found virtues in it that I have failed to discover. Personally I’d give it a miss.
Posted by dfordoom at 2:43 AM