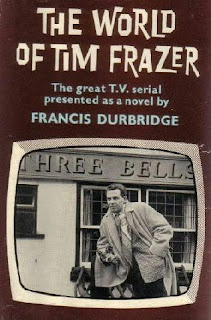 Francis Durbridge (1912-1998) was a prolific English writer of novel, plays, radio plays and television screenplays. He worked mostly in the crime genre although occasionally with a few spy thriller elements as well. The World of Tim Frazer was a very successful 1960-61 television serial which, sadly, has not survived. We do however have his 1962 novel based on that serial.

The World of Tim Frazer is a spy thriller. It belongs to the Reluctant Spy sub-genre, in which purely by accident a very ordinary man gets mixed up in the murky world of espionage. This is a sub-genre that was perfected by Eric Ambler back in the 1930s. By 1962 it was falling out of favour, with professional spies like James Bond and Matt Helm ruling the literary roost.

The Reluctant Spy format suits Durbridge’s style and in fact his straightforward detective stories more often than not feature heroes who have stumbled unwittingly into a world of crime.

Tim Frazer is a partner in an engineering film, or at least he was before the firm went belly up. The company’s failure can be attributed mostly to the recklessness and dishonest of Frazer’s partner Harry Denston. Frazer and Denston have however been friends for a long time and Frazer was well aware of Harry’s character flaws and he probably should have had enough sense not to go into business with him.

Now Harry has disappeared. That’s not unusual. Harry often has reason to make himself scarce for a while. What is unusual is that Tim Frazer has been asked to find Harry. He has been asked by a man named Ross who works for a government department. He cannot give any details about this department apart from the fact that it was access to large amounts of money about which the British taxpayer knows nothing and it has rather sweeping powers. In fact it seems to have more or less unlimited powers. It’s not MI5 but it’s obviously some shadowy counter-intelligence agency. And they’ve offered Tim Frazer a very generous salary. Tim Frazer is now a spy, or perhaps it would be more accurate to say he is now a spy-catcher. He has absolutely no training or expertise but he does know Harry Denston’s habits extremely well and this mysterious department has certain reasons for not wanting to use one of their own people on this case.

Frazer does have a few leads that might lead him to Harry. He knows that for some reason Harry’s car is terribly important. He knows that the seaside town of Henton, a drowned Russian sailor and a little girl named Anya are important. And the frigate North Star, which foundered in 1794, is extremely important.

Tim Frazer may be a rank amateur but he shows a certain flair for the game of espionage. He’s intelligent and he’s naturally suspicious of people and their motives. He’s good at spotting lies and he’s also quite good at bluffing people. There are a lot of lies to untangle but Frazer is patient and determined. He is just a little shocked when he has to confront the fact that this is a game in which people can get badly hurt or even killed but he recovers his equilibrium quickly enough. And he discovers that killing people isn’t all that difficult. He doesn’t like it but he can do it if he has to.

This is a low-key spy thriller. The world of Tim Frazer is a long way from the world of James Bond. There are no gadgets. There are no glamorous lady spies throwing themselves at him. There’s not a great deal of action. There is some violence. It’s not graphic violence but when it occurs it occurs suddenly and with a certain casual brutality.

Durbridge throws in enough plot twists to keep things interesting. Tim Frazer is, initially at least, working completely in the dark. He hasn’t been told why it is so vital that Harry should be found. He has been given no indication whatsoever as to exactly what Harry may have done. He doesn’t know who the bad guys are. He doesn’t know who he can trust. He doesn’t have any idea where Harry might have gone to. The reader knows as much as Frazer knows, which is virtually nothing. There’s a mystery to be unravelled but the mystery is not just the identity of the criminal but also the nature of the crime.

While The World of Tim Frazer has none of the glamour of Bond it also lacks the nihilism and pessimism that became increasingly prevalent in spy fiction during the 60s. Even in 1962 it must have had a slightly old-fashioned feel but on the whole it works and it’s enjoyable. Recommended.
Posted by dfordoom at 1:26 AM