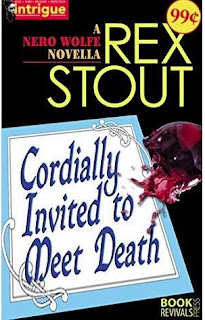 Cordially Invited to Meet Death is a 1942 Nero Wolfe novella by Rex Stout, published as a double-header with Black Orchids.

Bess Huddleston organises parties. She organises parties for very very rich people and she gets paid an enormous amount of money for offering this service. Now someone is sending letters that could ruin her business. Nero Wolfe isn’t particularly interested in the case but the fee being offered is very substantial, and Nero Wolfe is always very interested in substantial fees.

Nobody really expected that it would end in murder. The circumstances limit the possible suspects to five. There’s Miss Huddleston’s brother Daniel (whose bizarre chemical experiments she finances), her virtually unemployable nephew Larry, her secretary Maryella Timms, her party-organising chief assistant Janet Nicholls and a certain Dr Brady. The chimpanzee is almost certainly innocent and the bears have an alibi.

The centrepiece of this novella is the unusual murder method. Whether it would actually work in practice is perhaps open to debate but it certainly sounds chillingly plausible. And very difficult indeed to prove.

Cordially Invited to Meet Death is also notable as an example of Wolfe’s stubbornness. Inspector Cramer should know by know that trying to bully Wolfe just irritates him without achieving anything. It can irritate Wolfe so much that it inspires him to solve a case that he would otherwise not trouble himself over.

On balance it’s probably just as well Archie didn’t take his gun with him on his first visit to the Huddleston estate. There was no reason to shoot the chimpanzee. He was just playing. And the alligators were just being alligators.

Incidentally, those famous black orchids make an appearance in this story.

This story has a pretty decent plot. It’s very fairly clued but there’s enough misdirection to keep us guessing (well it managed to keep me guessing anyway). Wolfe’s solution is satisfying. Wolfe is in pretty good form. There’s a fairly colourful cast of suspects. There are some eccentric and even bizarre elements. And had he not taken the case Wolfe would never have discovered the secret of a really successful corned beef hash. A case that has a genuine gastronomic payoff is always a satisfactory case.

Cordially Invited to Meet Death is a most enjoyable tale. Highly recommended. And the edition that includes both this novella and the also excellent Black Orchids is a must-buy for Wolfe fans.
Posted by dfordoom at 2:40 AM