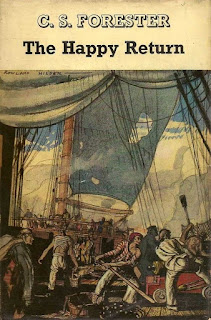 The Happy Return marked the first appearance in print (in 1937) of the last great old-fashioned English hero of fiction, Horatio Hornblower. It also established naval fiction as a very popular and lucrative sub-genre.

C.S. Forester’s dozen Hornblower novels cover the hero’s entire naval career but the publication order does not coincide with the chronological sequence of the stories. In The Happy Return Hornblower has already achieved the exalted rank of post captain and is commander of the 36-gun frigate Lydia. Later books in the series recount his earlier adventures as a midshipman and as a lieutenant.

The book opens with the Lydia making landfall in Central America after a seven months’ voyage, her stores dangerously exhausted. Captain Hornblower’s sealed orders have caused him some anxiety. He is to arm and support a rebellion against the Spanish and at the same time he is to capture or destroy the Natividad, a Spanish 50-gun warship which on paper at least totally outclasses the Lydia. It’s the sort of task that no captain would welcome. Fomenting rebellion and meddling in politics can so easily backfire and involve countless opportunities for disaster and if he fails it won’t be the men at the Admiralty who came up with the hare-brained scheme in the first place who will have to shoulder the blame, but Captain Hornblower. The chances of failure are very high and failure will spell the effective end of his career - he does not have the money or influence to weather such a storm.

Hornblower’s fears are soon realised when the situation changes radically and everything he has achieved so far turns out to have been all wrong. He has to start from scratch, and he has to fight the same battles over again.

To add to his woes he has acquired a passenger, a lady. That’s bad enough in Hornblower’s eyes but to make things much much worse she is a member of a family with the potential power to break the career of an impecunious frigate captain should that captain somehow offend her. His relations with Lady Barbara Wellesley (the sister of the future Duke of Wellington) are uneasy and they get more uneasy.

There’s as much action as you could want including an epic two-day sea battle in the middle of a gale.

Forester however was more than just a writer of stirring adventure tales. Although his books all fall within the boundaries of genre fiction he brought a definite literary sensibility to these works. There’s excitement and adventure in the Hornblower novels but there’s some real psychological insight as well.

Hornblower is a genuinely fascinating character. On the surface he is the ideal commander, a man of supreme self-confidence who always knows exactly what to do. He is a man of few words, which reinforces the impression of decisiveness and complete control. He is a strict but just disciplinarian. He has a knack for gaining the confidence and affection of those under his command.

That’s the appearance. In fact it’s all elaborately contrived. Hornblower is in reality a seething mass of self-doubts and self-recriminations. He is painfully uncomfortable in social situations. He is all too aware of his relatively humble birth and of his very modest financial circumstances. Being a member of the lower middle class he is not comfortable with the aristocracy or with the common people, which means he is at ease neither with his officers nor with the men. He is not a natural leader of men. He has had to school himself to become a leader.

In this endeavour he has succeeded. He knows how the ideal captain, the natural leader of men, should behave and he can mimic this behaviour with extraordinary success. And he has one great advantage - he really does know his job. He is a skilled navigator, he is a master tactician and however contrived his methods might be he is a superb leader of men. When the chips are down he is decisive and bold and his boldness is backed up by intelligence.

Hornblower sees himself as a fraud, almost as an actor playing the part of the great frigate captain but the irony is that he really is a great frigate captain. He is sure that the officers and men under his command despise him but in fact they admire him a great deal. Hornblower is in some ways a transitional figure, halfway between the old-fashioned heroes of swashbuckling romances and the new breed of introspective psychological complex heroes.

The Happy Return manages to be both intelligent and extremely entertaining. You can’t ask for more than that. Very highly recommended.

The first three Hornblower novels were the basis for the reasonably good 1951 Hollywood adventure film Captain Horatio Hornblower R.N.
Posted by dfordoom at 12:29 AM