Dennis Wheatley’s The Eunuch of Stamboul 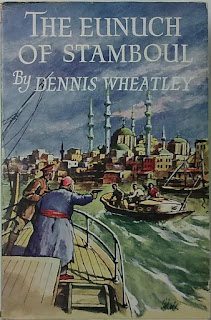 Published in 1935, The Eunuch of Stamboul is one of Dennis Wheatley’s straight spy thrillers, as distinct from his more famous occult thrillers.

Swithin Destime is a 35-year-old captain in a distinguished British regiment. He has virtually no money of his own and is thus entirely dependent on his army pay but he is content enough. Content that is, until fate steps in in the person of Prince Ali. Prince Ali is a nephew of the last Ottoman Sultan but he also holds a senior position in the new Turkish secular government established by Kemal Atatürk. He is therefore a representative of both the old and the new in Turkey and he is not a man that anyone would want to offend.

Unfortunately Swithin Destime has managed to offend him, in a quarrel over a woman. Prince Ali was trying to take liberties with a young woman, Diana Duncannon, in whom Swithin had a very strong prior interest. In the ensuing fracas Captain Destime knocks Prince Ali down. The fact that Prince Ali was at fault doesn’t help. The prince was at the time a guest of Destime’s regiment, and the British government is very very keen not to cause an incident with Turkey. Swithin Destime has no choice but to resign his commission.

Things look a little grim until Diana’s father Sir George Duncannon, a wealthy banker with extensive interests in the Near East, offers him a job, in Constantinople. Swithin is fluent in Turkish, Greek and Arabic, useful accomplishments since he will be acting as a kind of unofficial spy. Sir George is anxious to invest in Turkey but he has convinced himself that a  major upheaval is coming in that country. He has no idea of the nature of the upheaval - it’s Destime’s job to find that out.

He discovers what appears to be a plot to overthrow the government of Kemal Atatürk. It is not entirely clear what the ultimate aims of the plotters are but they seem to be hoping to restore conservative religious practices and possibly to dispense with the secular government altogether. What really worries Destime is that the conspirators also seem inclined to restore the empire of the Ottomans and to launch a jihad. This could create complete chaos in the Balkans and that chaos could result in the Great Powers being drawn in, leading perhaps to a general European war. While Destime has no particular feelings about Atatürk’s regime one way or the other the prospect of another European war appal;s him. He feels he must do something, although he has no idea what that something might be.

Destime’s efforts tend to demonstrate why espionage is a game best left to professionals. He’s brave and resourceful and reasonably intelligent but he does not know the rules of the spy game and he makes some bad mistakes. Making mistakes is something he can ill afford to do. He is up against formidable adversaries, the most formidable of all being Kazdim Hari Bekar. Kazdim is a eunuch but he has successfully made the transition from palace servant under the Ottomans to policeman under Atatürk and is now Chief of the Secret Police. He is ruthless, cruel, vindictive and very very cunning.

Destime has cause to reproach himself for not handling the situation the way Bulldog Drummond or the Saint would have done. In fact even by the standards of amateur spies Destime commits some spectacular blunders. He is however nothing if not persistent. He just doesn’t know when he’s beaten. He falls into the hands of the bad guys on more than one occasion, he is beaten and humiliated and sentenced to execution. Somehow he manages to come through, partly through luck and partly through sheer pigheadedness.

As well as secret policemen he also has to deal with beautiful female Russian spies and with fellow Britons even more incompetent than himself, plus of course the Turkish conspirators. He can’t go to the Turkish government - they would never believe his story without evidence (which he doesn’t have) - and he has to be careful about involving the British Embassy (he is after all a spy and a potential embarrassment to His Majesty’s Government).

Wheatley is at times prone to giving us extended info-dumps but in this case it’s pretty much unavoidable (unless the reader is already an authority on Turkish history) and they’re actually quite interesting.

This is a typical Wheatley thriller, which means more sexual content than is usual in 30s thrillers, an outrageous but very entertaining plot, a fair bit of violence with just the faintest hint of sadism and a good deal of glamour in an exotic setting. It all sounds a bit like a 30s version of a Bond thriller, which is not surprising since Wheatley was an important but often overlooked influence on Ian Fleming.

The Eunuch of Stamboul is a bit on the trashy side and Wheatley did not quite have the effortless panache of a Leslie Charteris (or an Ian Fleming for that matter) but there’s still plenty of good old-fashioned fun to be had here. Recommended.
Posted by dfordoom at 5:55 AM